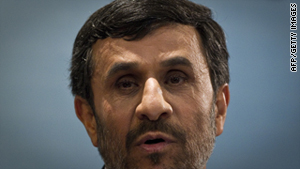 (CNN) -- Iranian President Mahmoud Ahmadinejad was not hurt Tuesday after an explosion at an oil refinery that he was visiting, Iran's FARS news agency reported.

The blast at the Abadan oil refinery injured six people and was caused by technical problems, the agency reported.

Undaunted by the blast, Ahmadinejad delivered a speech at oil refinery, the report said.

Abadan is a city in southwest Iran.