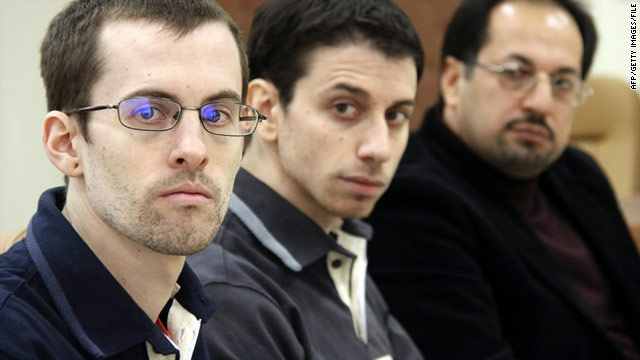 Shane Bauer (left) and Josh Fattal have been detained in Iran since their arrest during a 2009 hiking trip near the Iranian border.
STORY HIGHLIGHTS

(CNN) -- The scheduled trial of two Americans accused of espionage in Iran was delayed again Wednesday after the suspects were not brought from prison to the courthouse, a Swiss diplomat and their defense attorney told CNN.

"I have been able to verify that the session has actually been postponed due to the absence of the two prisoners. They were not brought in from prison," said an official with the Swiss Embassy in Tehran, who, according to protocol, asked not to be identified. Switzerland represents U.S. interests in Iran.

Josh Fattal and Shane Bauer were set to stand trial on Wednesday. The two were charged with espionage after being arrested nearly 22 months ago while hiking along an unmarked border between Iran and Iraqi Kurdistan. The two Americans were expected to appear in Branch 15 of Tehran's Revolutionary court Wednesday morning.

"There were no reasons given why they were not brought in," the diplomat said. Iranian authorities once again barred Swiss diplomats from monitoring the proceedings.

"Shane and Josh were not brought up from the jail to the courtroom today," said defense attorney Masoud Shafii. He said he also does not know the reason for the postponement, but does not believe it was because a third hiker released on bail, Sarah Shourd, did not return to Iran for proceedings.

The families of Bauer and Fattal issued a statement saying they also do not know why the two were not brought to court, "but we are even more deeply concerned for their health and welfare as a result of their non-appearance.

"Their unexplained absence from the hearing, and the fact that their lawyer, Mr. Masoud Shafii, continues to be denied access to Shane and Josh, is extremely troubling," the statement said.

The hikers' trial began in February, but was delayed until Wednesday.

Shafii told CNN Tuesday he had yet to be granted a private meeting with his clients.

"What I hope is that the court comes to a decision," Shafii said. "This case must be closed. It has gone on long enough."

On Wednesday, Shafii said he will continue to request a meeting with his clients.

"I am not sure when the next court date will be set," he said. "I now must wait for a letter from the court with the new date. I am hoping it will be soon. They (Bauer and Fattal) have already served time that was not warranted."

He said the judiciary, not prison authorities, is responsible for getting the defendants to court, and he has filed a formal complaint.

"The endless prosecution of the two hikers appears to be little more than a political jab at the United States," said Sarah Leah Whitson of the New York-based organization Human Rights Watch. "This case highlights the cruel and arbitrary nature of the Iranian justice system."

In a separate statement, Amnesty International's Hassiba Hadj Sahraoui said the Iranian justice system "has systematically failed to observe international fair trial standards in this case, including giving the men adequate contact with their lawyer, families or consular assistance."

The third U.S. citizen who was arrested with the men on the border in 2009 and accused of spying has refused to attend Wednesday's scheduled court hearing after being released on bail last year.

Iranian authorities allowed Sarah Shourd, Bauer's fiancee, to leave the country on "humanitarian grounds" after she paid a $500,000 bail.

Shourd said she would not return because she suffers from severe post-traumatic stress disorder after spending 14 months in Tehran's notorious Evin prison.

In an essay published this week in The New York Times, Shourd wrote that Fattal and Bauer's cell "contains two beds, a sink, a toilet, a shower and an empty space about the size of a large beach towel. With fluorescent lights continuously kept on, Josh and Shane never enjoy the luxury of darkness; in order to sleep at night they have to tie a shirt around their eyes."

Suspects convicted on espionage charges can face the death penalty in Iran. All three have maintained their innocence.

"They were strictly travelers who were near an unmarked border that no one would be able to know whether it was Iraq or Iran," defense lawyer Shafii has said.

"Today's development appears to be yet another example of the arbitrary treatment Shane and Josh have been subjected to for more than 21 months," their families said in their statement. "The Iranian authorities continue to play games with their lives and the constant uncertainty and fear for Shane and Josh is ruining our lives as well. The charges against Shane and Josh are baseless. As we have said all along, there is no reason to put Shane and Josh on trial."

The picturesque mountain border region where the Americans were detained is a popular picnic and camping destination for Iraqi Kurds. The border is also porous. Smugglers regularly cross the frontier on donkeys and horseback, bringing fuel to Iraq and alcohol into the Islamic Republic of Iran.