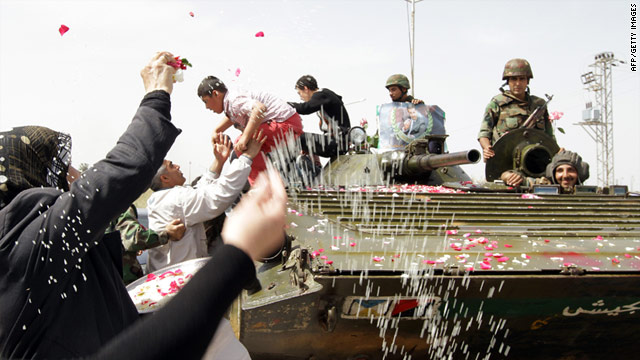 Syrian women shower troops with petals and rice as they pull out of the protest hub of Daraa on May 5 after a military lockdown.
STORY HIGHLIGHTS

Maher al-Assad, the president's youngest brother, is commander of the army's 4th Division and "principal overseer" of the crackdown against protesters, the EU said.

The head of Syrian intelligence, Ali Mamlouk, and Interior Minister Mohammad Ibrahim al-Chaar were also sanctioned, along with 10 other intelligence, security and business officials.

Their assets in Europe are being frozen, and they're now subject to an arms embargo and travel ban.

Syria has been cracking down forcefully for weeks on anti-government protesters inspired by the "Arab Spring" sweeping across the region.

Protesters have demanded the immediate release of political prisoners, lifting of emergency and martial law, and withdrawal of intelligence forces from Syrian cities.

On Tuesday, Syrian presidential adviser Bouthaina Shaaban told The New York Times that she believed the government had gotten the upper hand. "I hope we are witnessing the end of the story," she said. "I think now we've passed the most dangerous moment. I hope so, I think so."

State-run news agency SANA reported on the interview with the headline: "Dr. Shaaban: We are witnessing the end of the story."

The Times said that for the story, a reporter was allowed into Syria for only a few hours.

SANA also reported Tuesday that 2,684 "rioters" had "surrendered" and been released after pledging "not to repeat any action against the security of the citizen and the homeland."

Also, four "martyrs from the army forces, who were targeted by extremist terrorist groups in Homs," were buried, SANA reported Tuesday.

Last month, al-Assad lifted the country's 48-year-old state of emergency and abolished the state security court, both of which were key demands of the demonstrators. But anti-government protests have continued, with activists alleging massive human rights abuses and calling for political and economic reforms.

Security forces have relied heavily on the army and the regime's guard to disperse demonstrations.

Syrian security forces have been using soccer stadiums as makeshift prisons in at least two cities -- Banias and Daraa, the center of the uprising -- after raiding homes and arresting hundreds of residents, the directors of two human rights organizations said Monday.

In addition, security forces burst into homes and took residents into custody in the Damascus suburb of Modemiyah, where there were reports of gunfire Monday, said Rami Abdul-Rahman, director of the Syrian Observatory for Human Rights.

And in the city of Homs, a doctor said tanks were dispersed and security checkpoints were set up at the entrance to each suburb, with security forces, often backed by secret police, searching anyone passing through. The security presence was so heavy that people were afraid to demonstrate, the resident said.

The witness in Homs said he knew several people killed in demonstrations Friday who could not be buried, because security forces were not allowing funerals out of fear they might turn into demonstrations.

The doctor said he has seen several public buildings, including two health centers and a school, transformed into command and control centers for the Syrian security forces and military. Dozens of people have "disappeared," and their families believe they have been arbitrarily detained, the doctor said.

A U.N. humanitarian assessment team due to enter Syria was stopped, despite having previously been given permission by authorities, a U.N. spokesman said Monday. The mission was set to visit the southern city of Daraa.

U.N. spokesman Farhan Haq said Monday the United Nations was trying to clarify why it wasn't able to enter.

More than 400 people have been arrested in Banias since Saturday, Abdul-Rahman said, adding that authorities had converted the Mediterranean city's soccer stadium into a prison to house them.

In Daraa, another human rights organization observed a similar situation.

"In Daraa, there have been so many arbitrary arrests in recent days that the army and security forces are using schools and the city's soccer stadium as makeshift prison facilities," said Ammar Qurabi, chairman of the National Organization for Human Rights in Syria.

The heads of both organizations are not in Syria but remain in close contact with activists and protesters there.

Amnesty International said Friday that more than 540 people have been killed by Syrian security forces and that many activists in pro-reform protests "have been forced into hiding after receiving threats from Syrian authorities." On Monday, Amnesty said at least 48 people were killed by security forces in Syria "in the last four days," according to local and international human rights activists.