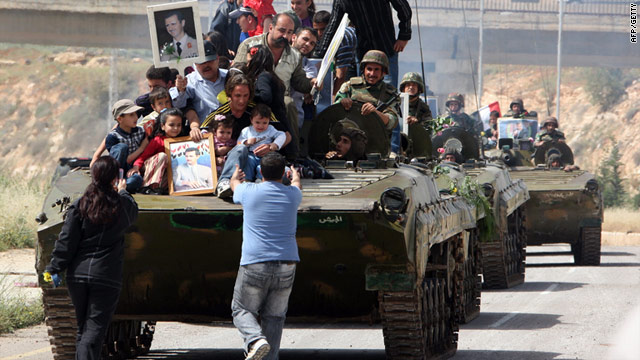 iReport: Send us your videos, photographs and stories to help document what's happening in Syria, but be sure not to put yourself in a dangerous situation.

In addition, security forces burst into homes and took residents into custody in the Damascus suburb of Modemiyah, where there were reports of gunfire Monday, said Rami Abdul-Rahman, director of the Syrian Observatory for Human Rights.

And in the city of Homs, a doctor said tanks were dispersed and security checkpoints were set up at the entrance to each suburb, with security forces, often backed by secret police, searching anyone passing through. The security presence was so heavy that people were afraid to demonstrate, the resident said.

The witness in Homs said he knew several people killed in demonstrations Friday who could not be buried, because security forces were not allowing funerals out of fear they may turn into demonstrations.

The doctor said he has seen several public buildings, including two health centers and a school, transformed into command and control centers for the Syrian security forces and military. Dozens of people have "disappeared," and their families believe they have been arbitrarily detained, the doctor said.

A U.N. humanitarian assessment team due to enter Syria was stopped despite having previously been given permission by authorities, a U.N. spokesman said Monday.

The mission was set to visit the city of Daraa, site of a crackdown by government forces.

U.N. spokesman Farhan Haq said Monday the United Nations was trying to clarify why it wasn't able to enter.

More than 400 people have been arrested in Banias since Saturday, Abdul-Rahman said, adding that authorities had converted the Mediterranean city's soccer stadium into a prison to house them.

In the southern city of Daraa, the hub of Syria's six-week uprising, another human rights organization observed a similar situation.

"In Daraa, there have been so many arbitrary arrests in recent days that the army and security forces are using schools and the city's soccer stadium as makeshift prison facilities," said Ammar Qurabi, chairman of the National Organization for Human Rights in Syria.

CNN could not independently confirm the reports. The heads of both organizations are not in Syria but remain in close contact with activists and protesters there.

State media reported that 10 people were killed and three were wounded Sunday when gunmen attacked a bus in Homs, a province where clashes broke out between security forces and protesters over the weekend. The state-run Syrian news agency, SANA, called the attackers an "armed terrorist group."

On Monday, SANA headlines stated that participants in the "public and legal campaign to prosecute sedition promoters" were set to prosecute the "conspirators" and that 1,083 people "involved in riot acts" had turned themselves in.

The "conspiracy against Syria aims at fragmenting Syria's national unity and destabilizing it," one of the articles read.

Human rights organizations criticize the arrests and violence, calling on Syria's government to establish an independent commission to investigate.

"We condemn the continued use of the Syrian authorities of violence and excessive force against the citizens of Syria demonstrating peacefully," said a statement from six organizations posted on the National Organization for Human Rights in Syria's website Monday.

The statement also expressed "deep concern" for those arrested.

"We call on security forces to stop the arbitrary arrests that take place outside the law and which constitute a flagrant violation of fundamental rights and freedoms guaranteed by the Syrian Constitution of 1973," the statement said.

The latest wave of arrests started as Syrian tanks and troops stormed a village near Banias on Saturday, killing at least four women and injuring several others, witnesses said.

Residents of Marquab formed a human chain to thwart the military, but soldiers raided homes and opened fire, said witnesses who were not identified for security reasons.

Witnesses said the army then rolled into Banias. They reported heavy gunfire and severe damage to the city.

But CNN has spoken with witnesses, some of whom have posted homemade videos online and reported what they have seen via social networking sites. Human rights organizations have also compiled reports.

Numerous demonstrations against Syrian President Bashar al-Assad's regime have broken out across the country over the past six weeks as protesters have demanded the immediate release of political prisoners, lifting of emergency and martial law, and withdrawal of intelligence forces from Syrian cities.

Last month, al-Assad lifted the country's 48-year-old state of emergency and abolished the state security court, both of which were key demands of the demonstrators. But anti-government protests have continued, with activists alleging massive human rights abuses and calling for political and economic reforms.

Security forces have relied heavily on the army and the regime's guard to disperse demonstrations.

Amnesty International said Friday that more than 540 people have been killed by Syrian security forces and that many activists in pro-reform protests "have been forced into hiding after receiving threats from Syrian authorities."

Some Middle East experts have speculated that al-Assad is taking advantage of the current focus on al Qaeda and the death of Osama bin Laden to intensify his crackdown.

Al-Assad was trained as an ophthalmologist.

Rubin also noted heavier attacks on rebels in the Libyan city of Misrata, as well as stronger crackdowns in Iraqi Kurdistan and Yemen. Leaders in several countries in the broader Middle East, he said, are taking advantage of the attention being paid to al Qaeda.

In the case of Syria, he added, U.S. President Barack Obama and other leaders in the international community may also be deciding not to react too strongly out of concern for the Middle East peace process. There is an attitude among some leaders, Rubin said, that it's better to deal "with the devil you know."

There may also be a fear of negative repercussions with Hezbollah in Lebanon if the West pushes ahead with a strong response in Syria, he added. Damascus has extremely close ties to Beirut.

Finally, the European Union's refusal to impose new sanctions against al-Assad so far may have convinced Syria's leader that "in a way, he's too big to fail," Rubin added.

CNN's Salma Abdelaziz and Alan Silverleib contributed to this report.