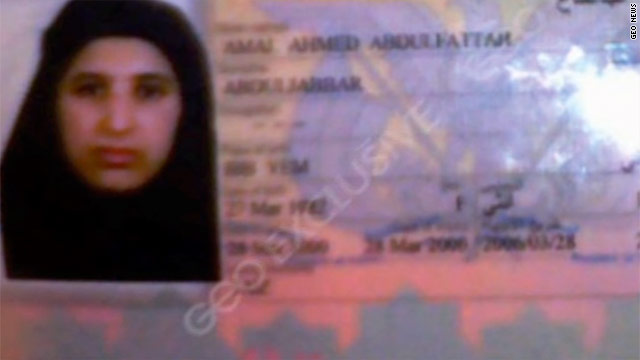 Amal al-Sadah's passport, which a relative said was obtained for the purpose of marrying bin Laden in Afghanistan in 2000.
STORY HIGHLIGHTS

Ibb, Yemen (CNN) -- When 18-year-old Amal al-Sadah became the fifth wife of 43-year-old Osama bin Laden in 2000, she was "a quiet, polite, easygoing and confident teenager" who came from a big, conservative family in Yemen, a relative told CNN in an exclusive interview.

The relative, Ahmed, who knew al-Sadah growing up, said she came from a traditional family in Ibb, Yemen -- established and respectable but certainly with no militant views paralleling the al Qaeda leader's terrorism.

The family had no connection to al Qaeda prior to the arranged marriage, Ahmed told CNN during an interview in Ibb on Friday.

While some accounts say a matchmaker put the couple together, the relative wasn't sure of that report, adding he heard many stories about how the two were betrothed.

"She was a very good overall person," Ahmed told CNN. "The Sadah family is a big family in Ibb. The family of Amal was like most Yemeni families. They were conservative but also lived a modern life when compared to other families.

"The family is a respected family and is well known. The family had no extremist views, even though they came from a conservative background," Ahmed said, referring to al-Sadah's parents and siblings.

The Yemeni government is apparently pressuring the family not to speak publicly about their notorious in-law, bin Laden, Ahmed said.

"From what I know, the government would give the Sadah family an extremely difficult time and always warns them from talking to the media," Ahmed said. "The government tells them that the information or comments they give would be misunderstood or misinterpreted and could hurt the family more than the government."

An al Qaeda figure in Yemen named Sheikh Rashed Mohammed Saeed Ismail said he arranged the marriageand told the Yemen Post in 2008 that he was "the matchmaker" and that al-Sadah was one of his students, describing her as "religious and pious enough."

Ismail, whose brother spent time as a detainee at Guantanamo Bay, accompanied the young bride-to-be to Afghanistan in July 2000, where she and bin Laden were married after he gave her family a $5,000 dowry.

The marriage was apparently a political alliance to shore up bin Laden's support in the land of his ancestors.

"I was told after they got married that Osama did not want to cut his ties with his ancestral home, Yemen," Ahmed said.

Back in Yemen, al-Sadah was barely spoken of again, Ahmed told CNN.

"After her marriage, we heard a little about her, and her direct family knew the dangers of talking about such topics," Ahmed said. "Even if anyone asked them about her, they would avoid talking about the issue."

At first, Yemeni authorities didn't seem aware that they were giving al-Sadah a passport in 2000 for the purpose of marrying bin Laden in Afghanistan, Ahmed said.

"Only a small number of people knew about the story of the marriage in the start, so it wasn't difficult to travel," Ahmed said. "The Yemeni government gave the family a hard time after she left Yemen. The family is still being watched and have been interrogated dozens of times. Her father also went through a lot."

The marriage was immediately fruitful, and al-Sadah and bin Laden gave birth to their first child, a daughter named Safiyah, in Kandahar, Afghanistan, in the weeks after 9/11.

According to Pakistani officials this week, Safiyah was inside the Abbottabad, Pakistan, compound where bin Laden was killed Monday by U.S. Navy SEALs, and she probably saw her father shot dead.

Ahmed asserted that al-Sadah and bin Laden also bore other children, but he couldn't provide details in his brief interview with CNN.

In "The Osama bin Laden I Know", Peter Bergen spoke with Pakistani journalist Hamid Mir, who met bin Laden soon after the 9/11 attacks. Mir said bin Laden had told him that he had plans for his youngest daughter, Safiyah.

"I became a father of a girl after September 11," he said. "I named her after Safiyah who killed a Jewish spy at the time of the Prophet. (My daughter) will kill enemies of Islam like Safiyah."

In the aftermath of bin Laden's death, al-Sadah has told interrogators that for five years, she didn't venture outside the walled compound, according to a Pakistani military spokesman.

Al-Sadah, now 29, who was wounded in the raid, said she lived in the compound in Abbottabad with eight of bin Laden's children and five others from another family, Maj. Gen. Athar Abbas told CNN this week.

All of them have been in Pakistani custody since the pre-dawn U.S. commando raid Monday that killed bin Laden, and they will eventually be returned to their country of origin, Abbas said.

With five wives, bin Laden had a total of 20 children, and one of his adult sons was also reported killed in the commando assault.

Al-Sadah is the youngest of the five wives.