American hiker says she won't appear for trial in Iran 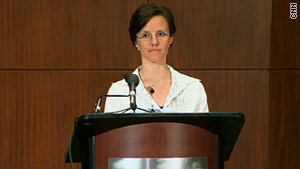 After 14 months in prison in Iran, Sarah Shourd was released on $500,000 bail because of a medical condition.
STORY HIGHLIGHTS
RELATED TOPICS

New York (CNN) -- An American hiker released last year from an Iranian prison said Wednesday she will not return to Tehran to face espionage charges in a court hearing scheduled for next week.

Sarah Shourd, one of three American hikers charged with spying in Iran, cited depression and post-traumatic stress disorder caused by her imprisonment as the reason for her decision.

Iranian authorities have charged the 32-year-old teacher and activist; her fiance, Shane Bauer, 28; and their friend, Josh Fattal, 28, with spying. Bauer is a journalist and Fattal an environmentalist.

The three graduates of the University of California at Berkeley had been hiking together in Iraq's Kurdistan region when they were detained by Iranian border forces on July 31, 2009, for allegedly crossing into Iran illegally. They have pleaded not guilty.

Last September, after 14 months in prison, Shourd was released on $500,000 bail because of a medical condition. She failed to return for a court hearing in February and is due in court on May 11, as are the two men.

But Shourd said Wednesday that a clinical forensic psychologist concluded that she would risk suffering renewed or worse psychological problems if she were to return to Iran to face the charges. She expressed sympathy for her fellow hikers, who remain in prison.

"I spent 14 months in Evin Prison but the situation is much, much worse for Shane and Josh, who have now been held for more than 21 months," Shourd said in a posting on www.freethehikers.org.

"Given the clear link between her capture and incarceration and the emergence of severe psychological symptoms (both during her incarceration and continuing, even seven months after her release) there is little doubt that Ms. Shourd's symptoms would worsen substantially if she were forced to return to Iran and face criminal sanctions," Rosenfeld wrote in a five-page report sent to the Iranian Revolutionary Court.

Relatives of Bauer and Fattal said they support Shourd's decision.

The two men, who share a 10-by-14-foot cell, have not spoken to their families since last November, the website said. Nor have they had access to their Iranian lawyer, it added.

Iranian authorities have said Shourd will be tried in absentia if she doesn't show.

All three defendants have pleaded not guilty. According to Iranian law, the cases "should be separated so the trials can go on," their Iranian lawyer, Masoud Shafii, said.

CNN's Ross Levitt and Susan Candiotti contributed to this story.