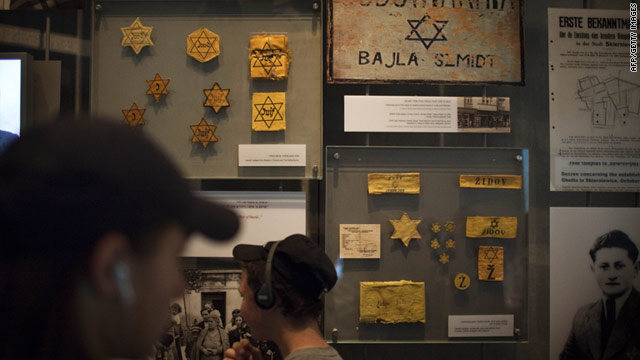 Jerusalem (CNN) -- Anti-Semitic incidents worldwide dropped sharply in 2010 from their peak in 2009, according to an annual report issued by an Israeli university on the eve of the nation's Holocaust Memorial Day.

However, the levels are significantly higher than they were a decade ago, when the upward trend began, according to the report from Tel Aviv University's Steven Roth Institute for the Study of Contemporary Anti-Semitism and Racism and the Kantor Center for the Study of European Jewry.

"The important question that must be asked today is: Have we learned the lessons of the Holocaust in the world? And to our great regret, the answer is no," Israeli Prime Minister Benjamin Netanyahu at the start of the weekly Cabinet meeting. "A renewed anti-Semitism is spreading. Various forces are joining together and flooding the world with anti-Semitism. The hatred of Jews and the denial of their existence have turned into hatred of the Jewish state and denial of its existence."

According to the report, major incidents of physical violence, direct threats and major acts of vandalism fell by 46 percent, from 1,129 in 2009 to 614 in 2010. Although it represents a decrease, researchers pointed out the figure of 614 is the third-highest reported since worldwide statistics began to be monitored in the late 1980s.

The 2009 peak was attributed to the Israeli incursion into Gaza in early 2009, which the authors said sparked violence against Jews. "Since Jews and Israelis are often conflated into a single collective, events in the Middle East often provoke anti-Jewish groups and individuals into perpetrating hostile activities against local Jews."

In 2010, the largest number of violent incidents took place in the United Kingdom, France and Canada. The three nations saw 60% of all worldwide incidents, the report said.

The report also expressed concern over "countless anti-Semitic diatribes, speeches, press articles and especially the electronic posts in almost every possible form on the internet ... the central themes were the Jewish - Zionist world power and conspiracy, the demonization and the delegitimization of Israel mainly by comparing it to Nazi Germany and labeling it an apartheid state."

Holocaust Memorial Day begins at sundown on Sunday. It marks the anniversary of the Warsaw, Poland, ghetto uprising, which began April 19, 1943, when German troops and police attempted to deport its surviving inhabitants. Jews held out against the Germans for 27 days. About 300 Germans and 7,000 Jews were killed in the violence.

The memorial day is also observed in the United States. Congress established the Days of Remembrance as the nation's annual commemoration of the Holocaust, according to the United States Holocaust Memorial Museum. The 2011 remembrance week is May 1-8.