Syria warns citizens not to participate in unlicensed protests 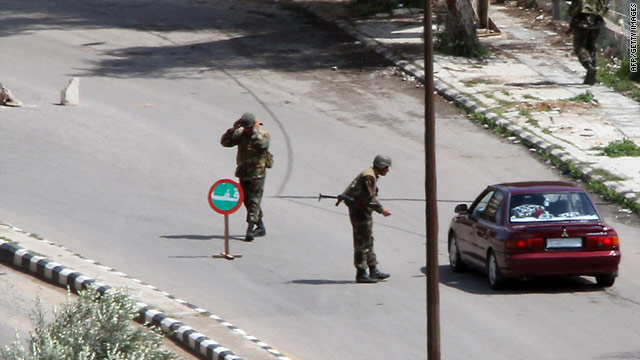 Syrian security forces have been accused of launching a violent crackdown in the city of Daraa.
STORY HIGHLIGHTS

(CNN) -- The Syrian government on Thursday warned its citizens not to participate in unlicensed protests, saying that "the laws in force in Syria will be implemented for serving the security of the citizens and the stability of the homeland."

The announcement came late in a day during which Syrian tanks and security forces swooped down hard on the restive city of Daraa, witnesses said.

Helicopters hovered as security forces fanned out across the besieged city, breaking into homes and making arrests. Streets were littered with dead bodies and dwellings had no water or electricity.

A city near the Jordanian border, Daraa is where the anti-government protests began and took hold last month. Now it is a test for police and soldiers attempting to quell protests and a government trying to cope with angry unrest.

Student back from captivity in Syria

Also Thursday, the Muslim Brotherhood entered the fray by offering support for the protesters.

"Hereby, we announce that we will be part of this national project led by the spectacular vision and the great spirit of the Syrian youth and we call upon all Syrians of all backgrounds to join in establishing a national project in which all Syrians achieve what they have dreamt of -- liberty, freedom and progress," the Islamic political group said in a statement.

Human Rights Watch said army troops and other security forces have killed more than 300 protesters since March 16. Other sources have cited higher numbers, and the government reports security personnel have also been killed.

Many of the deaths have occurred in and around Daraa, where heavy firing could be heard Thursday and smoke was seen rising from homes, mosques and schools.

Hundreds of snipers were stationed on the roofs of several buildings and security forces were shelling the city with mortars and anti-aircraft weapons, a witness said.

One witness said dozens of tanks rumbled across a bridge and fired shells, as people hurled rocks at the tanks and tried to stop them from moving into the old part of the city. Another witness said security forces making mass arrests detained a large number of young men.

A resident said people were too scared to take the wounded to hospitals since the streets were filled with security forces.

Residents have gone without electricity, milk and medicine for four days, said the witness, who asked not to be named for security reasons.

CNN was not able to independently confirm the accounts.

The unrest began in Daraa in March after teens were arrested for scribbling anti-government graffiti. People protested the arrests, security forces greeted the demonstrators harshly, and that emboldened more rallies.

Protests spread to other parts of Syria, where the same dynamic played out, despite promises and gestures of reform by the regime of Bashar al-Assad.

There's been an outcry in many international quarters due to the use of force against the peaceful gatherings. Human Rights Watch Wednesday urged Arab countries to "join international efforts to establish an independent international inquiry" into the issue.

"In recent days President Bashar al-Assad's government cut off access and communications with several cities, sending in tanks and troops in an effort to crush widespread public dissent," the group said.

The U.N. Security Council debated Syria on Wednesday but failed to agree on a response to the crisis.

The situation has even made its way into the planning for Friday's royal wedding in Britain of Prince William and Kate Middleton.

The entire Syrian diplomatic corps was invited to the event as a matter of protocol, but the British Foreign Office said Thursday that Syria's ambassador to the United Kingdom is now not welcome "in the light of this week's attacks against civilians by the Syrian security forces, which we have condemned."

CNN's Raja Razek and Nada Husseini contributed to this report