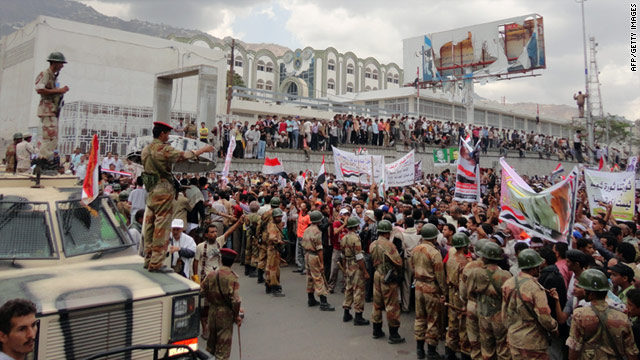 (CNN) -- Thirteen anti-government protesters were killed and more than 100 were injured Wednesday in Sanaa, Yemen, after they were attacked by security forces, two medical sources told CNN.

"We don't have enough medicine to treat the over 100 shot by the government. We call on the international community to give us medicine to save those the government shot from dying," said a senior medical staff member at Sanaa's Change Square.

The reported attacks represent one of the deadliest days in the weeks-long protests that have pitted demonstrators against President Ali Abdullah Saleh.

"The language of bullets and killing is what this regime wants to spread. It's a massacre against humanity and human rights. Eleven have been killed and the number is expected to rise," the medical staff member said.

Over the weekend, the protests spread across 14 provinces, despite Yemeni officials saying that Saleh had accepted a deal brokered by the Gulf Cooperation Council (GCC) under which he would step down.

Both Saleh and the Yemeni opposition have agreed to the deal in principle. But Saleh has yet to sign the agreement, which stipulates he leave office within 30 days and provides complete immunity for him and those who served in his regime, said a senior Foreign Ministry official, who requested anonymity because he is not authorized to speak to the media.

Violent anti-government demonstrations have erupted for many weeks across Yemen.

Saleh has been in power since 1978 and has served as a staunch U.S. ally in the fight against al Qaeda in the Arabian Peninsula.