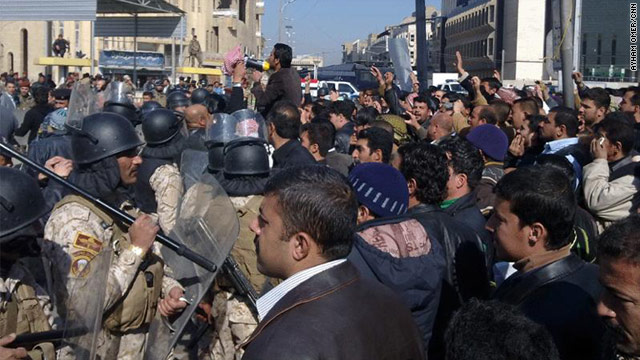 Demonstrators face security personnel in Mosul on Tuesday. They protested the U.S. troop presence in Iraq and other issues.
STORY HIGHLIGHTS
RELATED TOPICS

Baghdad, Iraq (CNN) -- At least two people were killed and dozens wounded in two unrelated attacks across northern Iraq on Tuesday, according to police and local journalists.There also was a bus crash in Anbar province that left eight people dead.

In the oil-rich city of Kirkuk, one person was killed and 30 others were injured after three roadside bombs exploded in rapid succession, according to police.

The incident occurred when a sticky bomb attached to an oil tanker exploded in the Arafa area in northeastern Kirkuk, setting the tanker ablaze.

In an incident in the northern ciy of Mosul, at least one protester was killed and 21 were wounded after security forces opened fire on demonstrators, police said.

The incident occurred in the city's Bab al-Hadeed area, where throngs of people gathered in the latest demonstration after weeks of protests across the region.

The demonstrators were protesting the possibility of American troops staying in the country beyond the end of 2011. Although the U.S. combat mission in Iraq officially ended last year, roughly 50,000 American troops are expected to remain until the end of the year to train, assist and advise Iraqi troops.

Iraqi Prime Minister Nuri al-Maliki told reporters Tuesday that "the internal security situation does not need" an extension. "As for the external defense of Iraq's sovereignty, then Iraq still suffers from shortages and Iraqi military still needs weapons to defend its sovereignty."

Al-Maliki stressed that the future of American involvement in Iraq requires what he called a national agreement reflective of the wants of what are at times disparate parlimentary factions.

"The government has not submitted anything yet," he said.

Protesters also are demanding the release of those who allegedly have been detained for years without facing charges. They also called for an improvement of basic government services.

Tuesday's shooting reflects a second day of violence in the northern Iraqi city.

After the incident, local officialssaid provincial Gov. Atheel al-Nujaifi called for acts of civil disobedience across the province in response to the shootings.

"Nineveh governor has reacted to these attacks by ordering to shut down all government institutions in the province on Tuesday," said Nineveh provincial council member Lamya Ahmed al-Dabbagh.

CNN was not immediately able to reach al-Nujaifi for comment.

Tuesday's shooting means two protesters have been killed and 30 others wounded by Iraqi security forces in less than 24 hours, according to police and provincial council officials.

On Monday, one protester was killed and nine others were wounded when Iraqi security forces used live bullets to disperse hundreds of protesters who rallied in the city's al-Ahrar square.

A representative for the security forces could not be immediately reached for comment. But authorities have often said that such gatherings offer opportunities for terrorist organizations, including al Qaeda.

Others said the gatherings are meant to be nonviolent.

"Since April 9, thousands of angry demonstrators have been rallying in Nineveh province and holding sit-ins," al-Dabbagh said. "The protesters have been very peaceful, but the military operation command has received an order from (al-Maliki) to end the demonstrations."

Adm. Mike Mullen, chairman of the U.S. Joint Chiefs of Staff, said Friday that Iraqi officials have not asked the Obama administration to push back the withdrawal deadline. Any discussion about a change in the timetable would be considered, he indicated, but would need to begin soon.

"There is no country from Iraq's neighbors (which) is thinking of sending its troops to Iraq," al-Maliki said. "Therefore Iraq's sovereignty is protected by the fact that there is nobody in the current circumstances and changes who would enter and violate Iraq's sovereignty."

Mosul is about 420 kilometers (261 miles) north of Baghdad. A largely Sunni city, it has been a hotbed of ethnic and sectarian strife.

In a deadly incident in Anbar province, eight Pakistanis were killed and seven others were wounded on Tuesday when their bus flipped over while driving on a highway, according to police officials in Ramadi.

The bus carried Shiite pilgrims who were driving from Syria to Karbala, a holy city about 240 kilometers west of Baghdad.

When Iraqi police arrived, gunmen opened fire using small arms. During the ensuing clash, one police vehicle was set ablaze while another was taken by the gunmen.

The attackers then fled the scene, police said.

Ayham Omer contributed to this report.