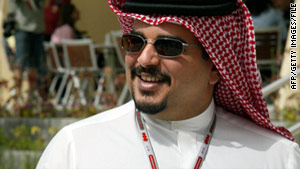 (CNN) -- Bahrain's Prince Salman bin Hamad Al-Khalifa has decided to decline an invitation to the royal wedding in London, citing the unrest in his country.

Al-Khalifa wrote to Britain's Prince William to let him know that with "deep regret" he was declining his invitation. The decision was "left for as long as possible in the sincere hope that ongoing events -- resulting from recent unrest in the Kingdom of Bahrain -- might have improved, leaving me able to join the celebrations of the House of Windsor and the family of Miss Middleton, without being overshadowed by issues in Bahrain," Al-Khalifa wrote.

Prince William is set to marry Kate Middleton on Friday.

The Bahraini government has been criticized for its response, and some human rights groups have reported that authorities have raided hospitals and tortured doctors and patients in an effort to quell protests. The government denies the claims.

The Bahraini prince has defended the government's actions response to the protests.

"We were immensely concerned that some of our youth were pushed towards a destructive path and that the nation was drawn along with them," Al-Khalifa said, according to an official transcript of a recent speech.

"We took necessary action to preserve lives and the livelihood and interests of all the people, based on our commitment to Islamic and Arab values," he said.

On Sunday, the crown prince said in a statement that he was "saddened and troubled" by British media reports concerning his attendance at the royal wedding. Those reports "fundamentally misrepresented" his views and outlook on the current crisis, he said.

Al-Khalifa ended his note to the British royals by wishing "Prince William and Miss Middleton all good wishes for Friday and every possible happiness for the future ahead."