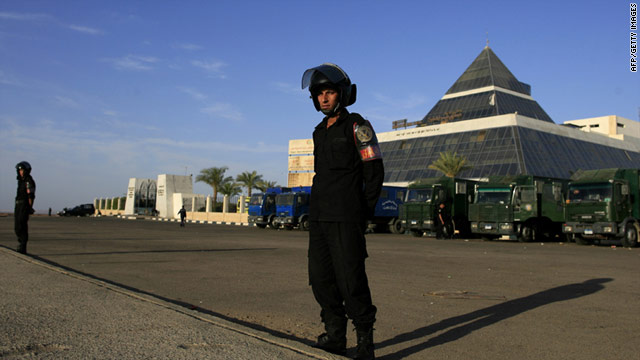 Cairo (CNN) -- Ousted Egyptian President Hosni Mubarak was complicit in shootings of anti-regime protesters during a period of upheaval in the country, a member of an official fact-checking commission said Tuesday.

"Whether the president gave the official order or remained silent knowing the shooting of protesters would take place, he is responsible for the 846 protesters who died during the January 25 revolution, especially since the killing started from Day One," said Judge Omar Marawan, the commission's secretary-general.

Marawan held a press conference after the release of the commission's report, which said 846 civilians and 26 policemen were killed during 18 days of protests that led to Mubarak's resignation on February 11.

The report focused on the killing and injury of demonstrators during the unrest in an effort to disperse them; what it said was the intentional opening of prisons, leaving a security vacuum; and the government's manipulation of the media. It also issued recommendations as the country moves forward.

Rebuilding Cairo slum a block at a time
RELATED TOPICS

The commission watched videos that confirmed several prisons were opened by security forces, according to the report. Members also concluded that police used extreme force against protesters and fired shots at people who were trying to film the unrest from balconies and windows. In addition, the report accused police of intentionally running over protesters with vehicles.

The commission's role was to compile information about the events and hand over their findings to the general prosecutor.