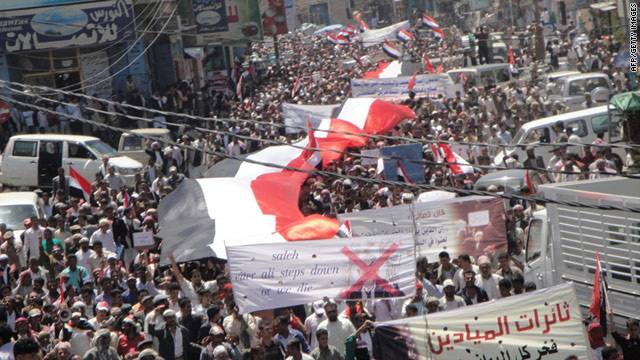 Demonstrators march in Yemen's Ibb province, about 120 miles from the capital, on Sunday, calling for the president to resign.
STORY HIGHLIGHTS

Witnesses said some others were arrested, but officials said they were released within hours.

All 11 had gunshot wounds, witnesses said. Two of the injured are in serious condition, medical staff at the square said.

"We were being shot at directly," said protester Abdullah Kulaibi. "Security forces were trying to kill us and not disperse us."

Witnesses said at least 20 protesters were arrested Sunday. A security official said they were released about two hours later. The official asked not to be identified, as he is not authorized to speak to the media. Field medical teams in Sanaa said some of the releases came because the detainees needed medical treatment after inhaling tear gas. One medical team member, Osama Qurashi, said those who were seriously impaired were taken to nearby hospitals, while the rest were taken to a field medical hospital set up in Change Square.

For weeks, demonstrators have taken to the streets calling for President Ali Abdullah Saleh to step down.

In Dhammar province on Sunday, more than 45 anti-Saleh protesters were injured when security forces sprayed tear gas to disperse them, eyewitnesses said.

Security forces also attacked some demonstrators with batons, injuring at least five, according to the medical staff at Change Square in Dhammar.

The latest marches against Saleh's regime came as the opposition Joint Meeting Parties sent a delegation to Saudi Arabia, where mediators are hoping to broker an agreement. Opposition officials told CNN their delegation was traveling to hear the ideas of the mediators, not to make an offer to the Yemeni government.

Some protesters in Yemen said whatever transpires at those talks won't change their stance. "Any negotiations that does not force Saleh to leave office will be rejected," said Shaef Saboor, a human rights activist in Sanaa.

Sanaa's main roads were flooded with crowds estimated by eyewitnesses as being in the tens of thousands pushing for a revolution -- most of them women, according to eyewitnesses. "Every day the number will grow. Today more females than males are protesting, thanks to Saleh's attack on women protesters," said Ameera Abdul Jabbar, a female activist in Sanaa.

In a speech given Friday, Saleh said women who were protesting were violating Yemeni cultural norms that prohibit women mixing with men who are not direct relatives. His comments angered many activists.