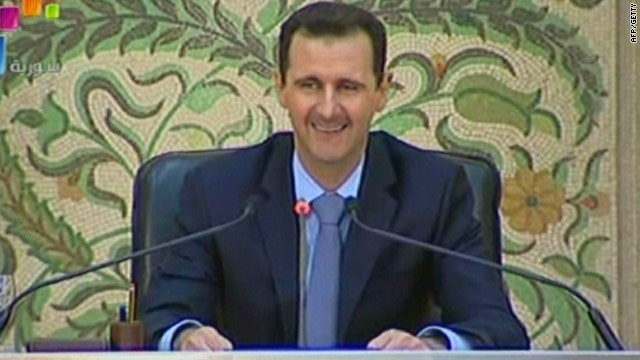 (CNN) -- Syrian President Bashar al-Assad said Saturday that the country's state of emergency, in effect since 1963, should be lifted by next week at the latest -- but that the final decision is up to the newly sworn-in Cabinet.

Al-Assad made the announcement Saturday hours after the Cabinet was sworn in, and two days after he announced the formation of a new government.

Opposition forces have been demanding the repeal of the emergency law, which allows the government to make preventive arrests and override constitutional and penal code statutes. the law also bars detainees who haven't been charged from filing court complaints or from having a lawyer present during interrogations.

"We (will) lift the state of emergency contrary to the opinion of many others who think this might lead to imbalance in the state of security," al-Assad said as he chaired a meeting of the new government. "I disagree with this, and I think this will consolidate the security of the country."

The president indicated he wants a new law allowing demonstrations to take place while protecting the public from "any chaos or damage to properties" and allowing Syrian security forces to enforce the law.

"We have to distinguish between reform and chaos," he said. "The Syrian people are civilized people. They don't like chaos, they don't like instability."

The new Cabinet includes a new prime minister -- Adel Safar, a Baath Party member who was the agricultural minister in the previous Cabinet, which resigned last month.

Syria retained its foreign minister, Walid al-Moallem, and defense minister, Ali Habib, but there are new heads in other positions, including the key posts of interior, finance, and media affairs, Syrian television said.

The announcement of the new Cabinet came amid continued anti-regime protests and clashes between demonstrators and security forces, a conflict that has caused scores of deaths.

Al-Assad expressed sadness over the deaths and sent his condolences to the families of everyone who has died in the unrest.

"This period we pass through, the blood that has been shed in Syria, has been painful for all Syrians," he said. "We are saddened by the death of any person who has been sacrificed."

He said an investigation committee is looking into the deaths.

Saturday afternoon, residents in Daraa rallied in the southern town's central square, according to a doctor there who declined to be named out of fear for his security. The thousands who gathered there chanted for the reform of the regime, trials for officials responsible for protesters' deaths, and solidarity with protesters in other cities.

The doctor said no security forces or police were present and there were no injuries.

Daraa was one of several cities where anti-government demonstrations happened Friday. Witnesses also reported demonstrations in Baniyas, Dair Elzour, Douma, Zabadani, the outskirts of Damascus and other cities where protesters called for political, economic and social changes.

In most locales, the day seemed peaceful compared with previous Fridays, when bloody clashes left many dead and injured. Still, the Syrian Arab News Agency, the official government news service, said a police sergeant was "martyred" after being assaulted by protesters in Homs.

Among the opposition demands is the end of one-party rule in Syria.

Al-Assad had already said he was studying whether to end the 48-year-old state of emergency and provide citizenship for stateless people in the Kurdish region as a way to placate the demonstrators.

Activists, however, say the government has cracked down violently on peaceful protesters. That claim is disputed by the Syrian government, which blames armed groups for attacking security forces and citizens.

Human Rights Watch, a prominent humanitarian watchdog group, issued a report Friday detailing "torture and ill-treatment" of protesters over the past month, and U.N. human rights experts released a statement deploring the crackdown on peaceful demonstrations.

In his address Saturday, al-Assad said the new government must "narrow the gap between officials and the public" and expand government transparency.

He also discussed the need to address government corruption, the high cost of living, and the high rate of youth unemployment.