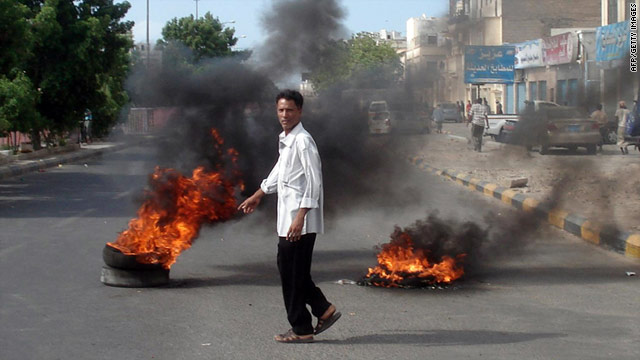 Sanaa, Yemen (CNN) -- Five people were killed in clashes between rival forces in the Yemeni capital Sanaa as nationwide protests against the government continued Wednesday.

Of the dead in Sanaa, two were loyal to Gen. Ali Muhsen Al-Ahmar, who has defected to the opposition, a government security official said. The other three were regime soldiers.

Government forces were sending in armored vehicles as reinforcements to the demonstrations in Sanaa, the official said.

Thousands of Yemenis took to the streets in Aden, Taiz, Hodeida and Dhamar.

In addition to the dead in Sanaa, two people were killed in Aden, according to medical staff at the city's Naqeeb Hospital.

Meanwhile, Yemen's attorney general threatened to resign unless the government went after the killers of anti-government protesters last month.

Abdullah Al-Olufi said "those who were responsible for killing almost 60 protesters and injuring hundreds of others should be identified and brought to justice soon."

"If the security authorities don't identify those responsible for the massacre including those who were masked, I will step down," Al-Olufi said as public and external pressure mounts on President Ali Abdullah Saleh to step down.

Protests erupted in Yemen this week despite an attempt by Persian Gulf nations to decrease tensions.

The Gulf Cooperation Council has urged Saleh to transfer powers to his vice president, a move that falls short with the protesters who returned to the streets for marches. Opposition leaders vowed not to back down.

The Joint Meeting Parties bloc, Yemen's largest opposition group, said the Gulf initiative "does not clearly state that Saleh must step down and only focuses on Saleh's transferring power."

"We all know the VP is not strong and will never be able to tell Saleh no, even if all his powers are transferred," said senior bloc official Hasan Zaid.

Saleh, in power since 1978, said he welcomes the council's efforts to help resolve the political crisis in his country. He has said he intends to step down but only under a peaceful and constitutional transition process. He has already promised not to run in the next round of elections.

The United States, which has been allied with the Saleh government in its fight against al Qaeda in the Arabian Peninsula, has welcomed past Gulf council initiatives to resolve the crisis in Yemen.