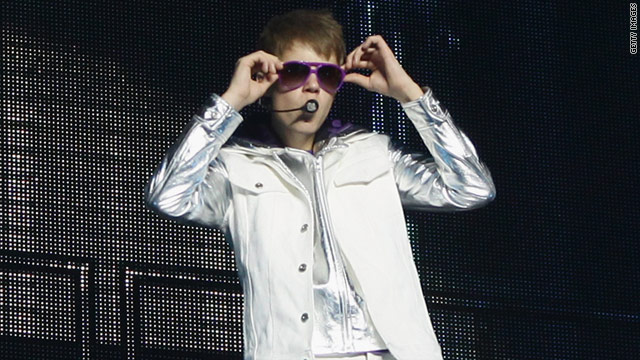 Justin Bieber cancelled a meeting with Benjamin Netanyahu and complained about the paparazzi during his Israeli visit.
STORY HIGHLIGHTS

Jerusalem (CNN) -- Pop star Justin Bieber may be beloved by millions of starry-eyed fans across the world, but Israeli Prime Minister Benjamin Netanyahu might not be among the faithful.

The 17-year-old Canadian pop idol visited Israel as part of his "My World Tour," where he fought off adoring fans and tried but failed to ignore the ever-present paparazzi. He also took to tartly tweeting about his every step until he decided to take a "little break."

But the biggest buzz in Israel was the news that a possible meeting between Bieber, who arrived in Israel on Monday for a Thursday concert, and Netanyahu never happened.

A Netanyahu spokesman told CNN that Bieber's people approached the government about the possibility of a meeting.

"The prime minister was open to the idea, of having an event to which he would invite youngsters from the south whom over the past three weeks have had a difficult time, spending nights in bomb shelters. The idea was to have an event that would be an enjoyable experience," the spokesman said.

I want to see this country and all the places I've dreamed of and whether it's the paps or being pulled into politics, it's been frustrating
--Justin Bieber
RELATED TOPICS

The spokesman isn't commenting on speculation in the Israeli media that the event was canceled because of its political nature.

Gad Oron, the Israeli producer for the concert said that he was not aware of any meeting being set up between the two.

"We have no idea, we did not approach the PM's office and we are not aware of any request to meet the PM."

Usually, Oron said, visiting artists try and set up these things through his office. However, he did not know whether Bieber's manager Scooter Braun had tried to set up such a meeting.

"I think I would know, though," he said.

Bieber made a reference to Israeli politics and the paparazzi in a tweet: "I want to see this country and all the places I've dreamed of and whether its the paps or being pulled into politics its been frustrating."

Meanwhile, the teen phenom couldn't shake the aggressive photojournalists eager to capture the boy's every movement, even at the most sacred spots in the Holy Land.

In a visit Tuesday to one of Christianity's holy sites, Bieber upbraided the paparazzi, a scene captured on camera.

"So let me ask you something, does it make you feel good that you're following me in a place when I'm trying to get close to God??"

One of Twitter's most followed users with millions of followers, Bieber displayed his skill and eloquence at composing bite-sized zings aimed at the hungry photographers, who are, of course, partly responsible for the boy's global notoriety.

"You would think paparazzi would have some respect in holy places. All I wanted was the chance to walk where Jesus did here in isreal," Bieber tweeted. "They should be ashamed of themselves. Take pictures of me eating but not in a place of prayer, ridiculous "

"People wait their whole lives for opportunities like this, why would they want to take that experience away from someone," he said in one of his Twitter teen memos.

Bieber confessed that he couldn't take the sacrilegious attention anymore.

"Staying in the hotel for the rest of the week u happy?"

Another tweet seemed to reflect the star's attempt to bring down the flames a notch:

"im just excited at this pt to get on stage and perform. gonna take a little break from twitter and enjoy this time with my family until then "