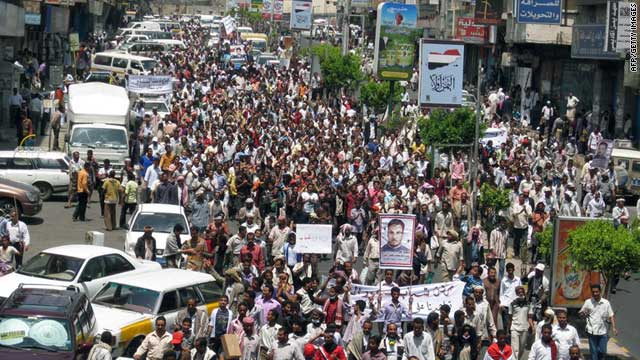 (CNN) -- Yemeni security forces opened fire on crowds with tear gas and live ammunition Friday in the southwestern city of Taiz, killing two people and injuring at least 300 others, according to medics at the scene.

They said 11 demonstrators suffered gunshot wounds and six were listed in critical condition.

Tens of thousands gathered in public squares in Taiz and the capital, Sanaa, calling again -- as they have done for weeks -- for reforms and an end to the longtime rule of President Ali Abdullah Saleh.

On the streets around Sanaa University witnesses said the protesters chanted: "Oh, world listen to our demands" and "Oh, Yemen, revolt, revolt, march toward the republican guards."

Thousands of counter-demonstrators gathered just a few miles away.

Earlier Friday, Saleh appeared to reject a mediation plan put forth by the Gulf Cooperation Council (GGC) that sought a compromise between his embattled administration and the opposition. It would have resulted in Saleh's removal.

But Yemeni Deputy Prime Minister Rashad Al-Alimi later issued a statement, saying "President Saleh did not reject the umbrella group's initiative but was not pleased with the Qatari prime minister's comments."

"President Saleh welcomed the efforts of the GCC to resolve the current political impasse in the homeland," the embassy said in a statement, adding the leader was grateful "for their strong support for the security, stability and unity of Yemen."

A senior Yemeni Interior Ministry official said, however, that the Qatari leader had "personal reasons" for pushing the deal. He did not provide additional details. The Yemen Embassy statement did not list Qatar as receiving a call from Saleh.

Saleh has warned against the potential dangers of foreign intervention in what he says are internal matters.

"We get our power and trust from the great Yemeni people and the constitution," Saleh said on state television Friday. "We will reject any new initiative from any country dealing with Yemen's current crisis."

"Our power comes from the great people of Yemen, not Qatar or anyone else," he said.

The United States ratcheted up pressure on Saleh on Friday and said it welcomed the Gulf council initiative.

"We strongly encourage all sides to engage in this urgently needed dialogue to reach a solution supported by the Yemeni people," said Mark Toner, spokesman for the State Department. "President Saleh has publicly expressed his willingness to engage in a peaceful transition of power; the timing and form of this transition should be identified through negotiation and begin soon."

Journalist Hakim Almasmari in Sanaa, Yemen, contributed to this report.