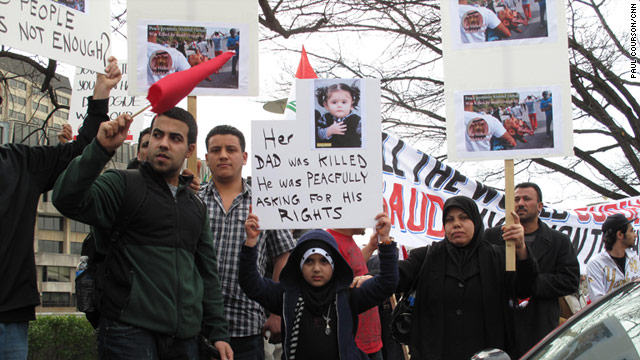 The protests, which were peaceful, also called for the withdrawal of regional forces from neighboring Bahrain, according to the activists, who requested their names not be used because they had concerns for their safety.

All the protesters were Shiite. The protests took place in the city of Qatif and the village of Awamiyya, both in the country's Eastern Province, and each the scene of similar protests in March.

In Qatif, about 200 people marched through the streets, chanting for the release of the prisoners, the activists said. Some carried Bahraini flags in a 90-minute march that some said was in solidarity with Bahrainis.

In Awamiyya, more than 150 Shiite men and women marched for the release of prisoners and for the withdrawal of Gulf Cooperation Council forces from Bahrain. As in Qatif, some protesters carried Bahraini flags.

Several members of the council have sent troops to Bahrain to help Manama quell anti-government protests.

The protesters in Awamiyya also called for human rights in a march that lasted just over an hour.

In both places, security forces were present but didn't interfere, the activists said.

CNN was unable to reach the Saudi Interior Ministry for comment.

The issue of Shiite prisoners and a demand for more rights have been the focus of similar protests in Saudi Arabia in the past two months, although fewer demonstrations have taken place in recent weeks.

Others have demonstrated for the creation of a constitutional monarchy and other reforms.