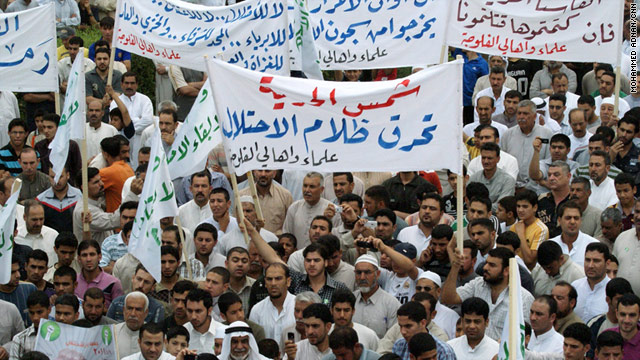 (CNN) -- Thousands of protesters in Baghdad on Friday marked the eighth anniversary of the symbolic fall of Saddam Hussein's regime, officials with Iraq's Interior Ministry said.

On April 9, 2003, the former ruler's statue was toppled in the city's Firdos Square. On Friday, protesters in Tahrir Square and the northeastern Adhamiya neighborhood demanded that all U.S troops withdraw from Iraq immediately, the officials said.

Every Friday, crowds gather in central Baghdad's Tahrir Square and other locations across the country to protest corruption, unemployment, the lack of basic services and restrictions on freedom of expression.

In Adhamiya, a predominantly Sunni neighborhood, nearly 2,000 men and women gathered outside Abu Hanifa Shrine after Friday's sermon, the ministry said. Some of the protesters carried Iraqi flags, and others held banners calling for the release of detainees and compensation for "the victims of the occupation."

Some of the protesters shouted, "No to occupation, no to foreign troops," witnesses said.

A Sunni imam in Adhamiya called the current government an illegitimate one that was "created by the occupiers."

In Tahrir Square, nearly 300 protesters, carrying banners and Iraqi flags, shouted, "We will not accept life in an occupied country anymore." One of the banners read, "No to American and Iranian occupation!"

In Falluja, about 60 kilometers (37 miles) west of Baghdad, nearly 300 people marked the anniversary with a demonstration outside the provincial council building, witnesses said. They demanded the release of detainees in Iraq's prisons and compensation for the families of victims who were killed in the past eight years. The protesters also warned Iraqi lawmakers not to allow U.S military bases in Iraq.