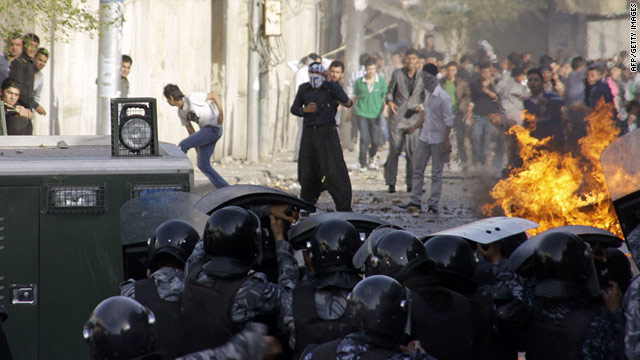 (CNN) -- The war-torn nation of Iraq is not "immune" to the "wave of civil unrest" sweeping the Arab world, and if it doesn't respond swiftly to grass-roots grievances, the battered country's political and security gains could be threatened, according to a report from U.N. Secretary-General Ban Ki-moon.

The report is an update on the activities of the United Nations in Iraq, and covers a range of developments -- political factors, regional and international events, and operational and security issues. The last such review was issued in November, and the present report covers the period from November 26 to March 31.

The report notes that several locations in Iraq endured protest in February, with people raising issues over "the provision of basic services, the lack of employment opportunities and corruption of officials."

Demonstrations were in Basra, Kut, Baghdad, Mosul, Karbala, Diwaniya, Anbar, Irbil, and Sulaimaniya. About 20 people were killed and more than 100 people were injured in the unrest, the report said.

Governors of three provinces resigned after "strong protests" in their provinces, and "Prime Minister Nuri al-Maliki issued a statement requiring that government ministries take urgent steps over a period of 100 days to improve living conditions and access to essential services."

"Unless there is quick and concerted action by the Government of Iraq to address these concerns, the political and security gains that Iraq has made in recent years could be undermined," Ban said. The secretary-general welcomed al-Maliki's directive to the ministries.

Ban expressed concern over how security forces have handled some of the protests, citing "consequent" deaths and reports of "arbitrary arrests," jailings, torture, and mistreatment of journalists.

"I call on the Government of Iraq to conduct an independent investigation into these alleged violations and to ensure a measured approached in dealing with future protests by exercising maximum restraint and avoiding violence," he said.

The report comes as U.S. forces in Iraq plan to withdraw all of their troops by the end of the year. At present, there are about 47,000 American troops there, according to the Brookings Institution's Iraq Index.

It says that while Iraq has achieved progress on the political front, the overall security situation "remains tenuous."

"The security situation in Iraq continues to affect the civilian population, who face ongoing acts of violence perpetrated by armed opposition groups and criminal gangs," the secretary-general said.

"In particular, armed groups continue to employ tactics that deliberately target crowded public areas and kill and maim civilians indiscriminately. While some attacks appear to be sectarian in nature, frequently targeting religious gatherings or residential areas, others seem random, aimed at creating fear and terror in the population at large and casting doubt over the ability of the Government and Iraqi security forces to stem the violence."

The report said mass graves continue to be found, and they contain the victims of the Saddam Hussein regime and those killed during the conflict after 2003. It says all Iraqis have endured violence, including attacks against Shiite pilgrims and the targeting of Christians.

It said there are reports of "torture and maltreatment of detainees," and raised concern about the numbers of boys and girls in prison and pretrial detention.

The report said the United Nations is operating "in a volatile security environment" with "persistent and unpredictable changes." However, he noted improvements in the performance of the Iraqi security forces.

"There were over 3,000 security incidents during the reporting period, which resulted in at least 950 civilian deaths. The increase in operational capacity and security operations of the Iraqi security forces has, however, contributed towards a reduction in overall attacks involving improvised explosive devices, as well as significant interdiction of supply routes and materials for those devices," the report said.

The United Nations said it's "expanding its security capacity" ahead of the drawdown of U.S. troops by the end of the year."

"Given that insurgents still demonstrate capacity to stage complex attacks in Iraq, a trend that is likely to continue in the near future, the United Nations will need to continue to remain vigilant in ensuring the safety and security of its personnel," the report said.

The report cited the formation of a new government in December, a "development that should enable Iraqi leaders to begin to tackle the major political, social and economic challenges." It took months of political jockeying to create a new government after an election in March 2010.

Ban called the transition from one elected government to another a "historic accomplishment" that ended "months of political uncertainty." But he said key security posts need to be filled.

"This development should enable Iraqi leaders to begin to tackle the major political, social and economic challenges," the report said.