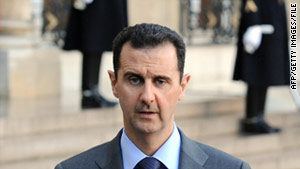 Syrian President Bashar al-Assad has been under pressure in recent weeks as anti-government protests have spread.
STORY HIGHLIGHTS

(CNN) -- Tens of thousands of Syrians marched Sunday in memory of anti-government protesters killed on Friday, calling them "martyrs" and chanting for freedom, demonstrators told CNN.

"The area was so packed with thousands of people it was difficult to move," said human rights activist Wissam Tarif, calling it "the biggest crowd I have ever seen since the unrest started."

After eight victims were buried, protesters shouted slogans including, "The people demand the fall of the regime," Tarif said.

Other demonstrators chanted, "With our blood, with our souls, we will sacrifice for you martyrs," at the Grand Mosque in the Damascus suburb of Douma, the site of Friday's protest, another eyewitness said.

National security forces left the marchers alone because the dead had been declared martyrs, the source said, requesting not to be named for safety reasons.

The government did not immediately confirm there had been a march or that security forces had steered clear.

The Damascus Center for Human Rights Studies said Sunday that 123 people have died since the start of the unrest in Syria last month.

In Douma, Syrians protest against govt

Syria is a game-changer

Opposition leaders circulated a list of demands, saying that if the regime were to respond positively, they would not call for the government's collapse. The demands include the immediate release of political prisoners, lifting of emergency and martial law, and withdrawal of intelligence forces from Syrian cities.

Syrian President Bashar al-Assad appointed a new prime minister earlier on Sunday. Adel Safar, a former academic with a doctorate in biotechnology, was agriculture minister for eight years before being appointed to lead the government, the state news agency said.

The government resigned last week in the face of protests that have left at least dozens dead.

Al-Assad accepted their resignations on Tuesday, but made no further concessions in a widely anticipated speech to the nation on Wednesday.

At least 15 people were killed in Douma on Friday, Tarif said Sunday. He based his tally on calls to hospitals and relatives of the victims, he said. Eight people were buried Sunday, he added.

Another person was killed in Al Sanameen near Daraa, activists said earlier.

The anti-regime demonstrations pulsating across Syria resulted in a security hunt for armed snipers and a wave of arrests Saturday.

Syrian security forces were searching for members of an "armed group" that killed "a number of citizens and security forces" in Douma on Friday, the Syrian Arab News Agency reported on Saturday.

SANA reported that a girl was killed when the armed group opened fire on civilians in the city of Homs.

The agency cited an official source as saying that snipers from the group fired at citizens and security forces from rooftops.

"Security forces are pursuing the members of the armed group that terrorized the citizens through firing randomly," SANA reported, citing the source without identifying the official or the alleged armed group.

The Syrian Observatory for Human Rights said security forces in the volatile southern city of Daraa and in Homs arrested about 20 people on Saturday after demonstrations the day before.

Along with the protests in Douma, Daraa, Homs and Al Sanameen, people also took to the streets in Latakia, Baniyas and Kamishli on Friday, activists told CNN.

Before Friday's fighting, dozens of people were killed in the last two weeks across Syria, with many deaths reported in the southern city of Daraa, where popular demonstrations started, and the coastal city of Latakia, activists say.

The list of opposition demands circulated Sunday called for a decree guaranteeing the right to peaceful demonstrations and the "termination of all threatening and intimidating acts against our sons and daughters in our schools whether by school staff or secret service agents in and around the schools and to refrain from obliging them to participate in demonstrations supporting the regime."

It called for an amended constitution accommodating "a multi-party democracy" and guaranteeing "basic human rights," the establishment "of a truly independent judiciary system," freedom of information and expression and an end to "the existing corruption in Syria."