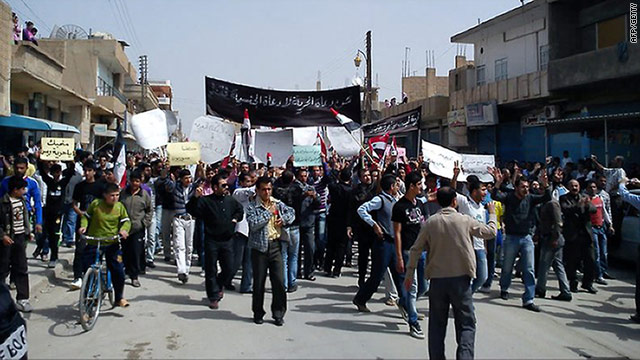 Thousands of anti-government protesters march in the northeastern Syrian town of Kamishli after prayers on Friday.
STORY HIGHLIGHTS

(CNN) -- At least seven people died and dozens were injured as Syrian troops assaulted demonstrators who took to the streets after Friday prayers, witnesses and activists said.

Troops used gunfire amid protests in the Damascus suburb of Douma, according to witnesses and opposition sources, and one witness saw at least six dead demonstrators taken into a hospital morgue. Witnesses also said a man was shot in the head with a rubber bullet and dozens were injured.

Another death and 10 injuries occurred when troops shot at protesters marching toward the southern town of Al Sanameen, witnesses said.

Protests also were reported by witnesses in the cities of Daraa, Latakia, Homs, Baniyas and Kamishli, sources said. Opposition sources cited witnesses in Homs as saying thousands of people had gathered around a mosque.

In Douma, Syrians protest against govt

A closer look at Bashar al-Assad

Anti-government activists had promised demonstrations in Syria on Friday to air their grievances against the Bashar al-Assad government.

Tensions have been high as dozens of people have been killed recently in Daraa in the south and Latakia in the west -- both centers of ferment.

Thousands of demonstrators from different villages and towns gathered near Daraa and marched toward Al Sanameen. They were 25,000 strong by the time they reached a military checkpoint just outside the city, witnesses said.

About 1,000 heavily armed troops at the checkpoint fired on demonstrators forcibly trying to cross the spot and enter Al Sanameen, witnesses said.

"Their blood is on my shirt and we are tending to the wounded as we speak," a witness said. Ambulance sirens could be heard in the background during the witness's phone call to CNN.

Demonstrators are staying at the checkpoint and demanding they be allowed into the city.

According to an eyewitness, the gunfire had stopped and protesters were trying to appeal to soldiers, chanting, "The people and the army are one hand."

They also chanted, "With our bloods, our souls we will sacrifice for you, Daraa."

One witness said security forces attacked thousands of protesters at the "big mosque" in the center of Douma with electric batons, tear gas and live ammunition.

"I have never in my life seen such violence: men shooting guns into an unarmed crowd without a thought," said the eyewitness, who had been hurt in an electric-baton beating and taken to the hospital for a head injury.

Along with the six dead, he said, he saw dozens of wounded, many of whom were seriously injured.

Another Douma demonstrator claimed his son had been injured in the gunfire.

Witnesses said a mosque in Kafr Sousa, another Damascus suburb, had been surrounded by security forces who had fired rubber bullets, and Maleh said he was told about the unrest there.

"Hundreds are now trapped in Abdul Karim Rifai mosque in Kafr Sousa near Damascus," he said. "They called me to say that more than 50 people were injured and taken away from the mosque to security headquarters after being brutally beaten in the street."

CNN could not independently confirm the witness accounts, and it is not known whether the two people Maleh reported dead are among or in addition to the six the eyewitness reported.

The Syrian government has made no public comment about Friday's events, though the Syrian Arab News Agency (SANA), citing an official source, said armed groups in Douma fired on security forces and civilians, killing "several" people and injuring "dozens" of others. In Homs, a group shot into a crowd, killing a girl, SANA said.

The agency reported protesters and security forces did not clash in Daraa and Latakia. In some Syrian provinces, people took to the streets to call for national unity, SANA said.

Activists, who have many political and economic grievances, have been riled in recent days by President al-Assad.

They are upset that he failed to announce the lifting of the country's state of emergency during a national TV address on Wednesday and didn't properly address, in their view, complaints and concerns of people in the streets.

On Thursday, however, Syria said it will study the idea of lifting the country's state of emergency and promptly investigate the deaths of civilians and troops in two flashpoint regions.

Al-Assad ordered the Supreme Judicial Council to form a committee that would conduct "an immediate investigation in all cases that killed a number of civilians and military personnel."

The committee exploring the lifting of the emergency law is expected to complete the study before April 25. It will be made up of senior lawyers, SANA reported.

One of the key demands of the demonstrators who have taken to the streets in the country's major cities is the scrapping of the law, which has been in place since 1963.

The emergency law allows the government to make preventive arrests and override constitutional and penal code statutes. It also bars detainees who haven't been charged from filing court complaints or from having a lawyer present during interrogations.

"It's extremely disappointing that President al-Assad has done nothing more than repeat the same vague promises of reform that he's been uttering for over a decade," said Sarah Leah Whitson, Middle East director at Human Rights Watch.

"What's needed immediately if the authorities are to restore any shred of credibility are concrete actions to dismantle Syria's special courts and abolish provisions that criminalize free speech, assembly and association."