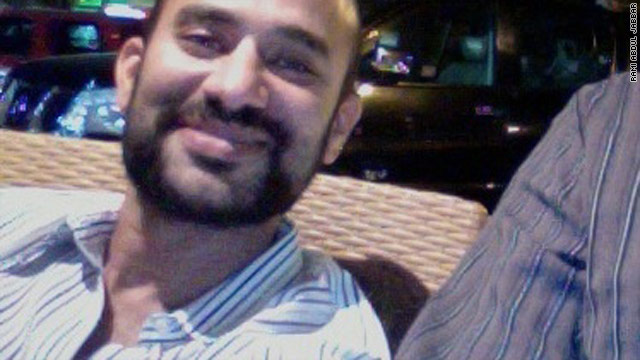 Muhammad Radwan was released to the Egyptian Embassy in Damascus on Friday, according to family members.
STORY HIGHLIGHTS

(CNN) -- Two Americans detained amid the social turbulence in Syria have been released, the State Department and others said Friday.

The United States never got consular access to the Americans while they were detained, but department spokesman Mark Toner said the United States is "satisfied" that they have been released.

He gave no other details, citing "privacy considerations." But other sources identified the two as Pathik "Tik" Root of Ripton, Vermont, and an Egyptian-American, Muhammad Radwan.

U.S. Sen. Patrick Leahy, D-Vermont, announced Friday that Root was at the U.S. Embassy in Damascus and would soon be returning to the United States.

Radwan's family said he was released to the Egyptian Embassy in Damascus on Friday.

Radwan's cousin Nora Shalaby, who helped organize a campaign for his release, said she spoke with Radwan by telephone.

"I got an international phone call and it was this guy from the Egyptian Embassy in Syria," Shalaby told CNN. "He said I have really good news ... there's someone who wants to speak to you."

"At first I thought it was his dad," Shalaby recounted. "And then he said, "No this is Muhammad."

Syrian authorities detained Radwan a week ago and showed him in a televised confession on state TV.

Syria remains in state of emergency

According to his Twitter account, he was following the growing protests in Syria, remarking at one point that the atmosphere reminded him of the revolutionary fervor in Egypt last January.

Root, a student at Middlebury College, disappeared March 18 in Damascus.

His father, Tom Root, has told CNN that his son, who is studying this spring in an Arabic program through Damascus University, probably watched a protest but would not have participated.

"Ambassador Ford's constant and effective advocacy for the release of Tik from detention was critical to his release," Leahy said.

The senator also noted "the invaluable assistance of Syria's ambassador to the United States, Imad Moustapha, who helped convince his government that a mistake had been made and that Tik should be allowed to return home."

Leahy said he had kept in regular contact with both ambassadors over the past two weeks, and noted that "they kept me updated day and night and were always available to accept my calls."

Radwan's family said he was born and raised in Houston, the son of affluent Egyptian parents employed by the Saudi Arabian oil giant Aramco.

After graduating with an engineering degree from Texas A&M University, he worked for several years in Saudi Arabia before taking a year off to backpack across Latin America. On his Twitter account, Radwan describes himself as an "engineer to international vagabond to engr ... cyclic."

In April 2010, Radwan went back to work, this time for an oil company in Syria. But this January, he rushed to Cairo to join the protests in Tahrir Square against Egyptian President Hosni Mubarak.