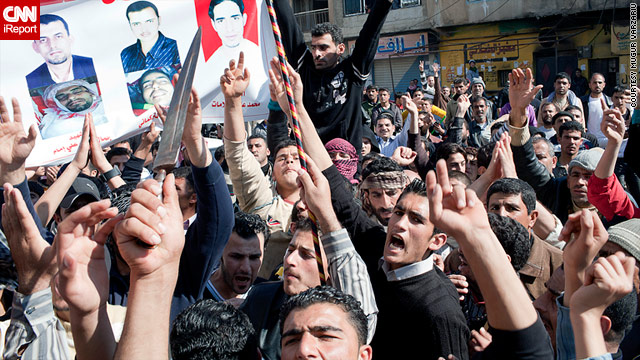 At least 37 people have died in violent protests since last week in Daraa, the U.N says.
STORY HIGHLIGHTS

(CNN) -- Syrian security forces flooded the restive cities of Daraa and Latakia on Monday, patrolling the streets, protecting government buildings and in at least one case clashing with protesters, according to witnesses.

Both cities have been the scene of violent clashes between protesters and security forces in recent days, with at least 37 deaths since last week, according to the U.N. Office of the High Commissioner for Human Rights.

In Daraa on Monday, forces filed into the city's main square before dawn, tearing down the tents and anti-government signs of about 100 protesters who were staying there overnight, according to one eyewitness. The forces fired shots into the air and turned water cannons on the protesters, the witness said, leading to a clash with hundreds of nearby residents who rushed to the square to defend the demonstrators.

The resulting confrontation lasted about 30 minutes, reportedly without injuries or arrests, according to the witness.

Syria's emergency law to be lifted

Another witness said the army was blocking the city on three sides and that security forces, surrounding government buildings and the Al-Omari mosque where some protesters remained, had opened fire. The witness was not aware of any injuries.

Political dissident Aman Aswad, who is in Daraa, said the city is extremely tense. "People are sitting at home scared, watching the updates on TV," he said.

In Latakia, another eyewitness said mysterious men in black shirts carrying sophisticated weapons terrorized residents overnight, firing into the air and banging on the doors of homes.

"We do not understand who these men are but government officials say they are members of a 'foreign group,'" the witness said. "We all think they are lying about this because every time one of them is captured and handed over to the police he is released."

Hundreds of government troops have also filtered into the Latakia and are guarding public buildings and other important sites, the witness said.

CNN could not independently confirm the accounts because the Syrian government has yet to grant access to the network.

Syria is the latest in a string of Arabic-speaking nations beset with discontent over economic and human rights issues. Syria's discontent is centered Daraa, a southern city in the impoverished country's agricultural region, where security forces and anti-government protesters have sporadically clashed for nearly two weeks.

Thousands of protesters marched Friday to the governor's building in Daraa, where they burned pictures of President Bashar al-Assad and toppled a statue of his father, the late President Hafez al-Assad, according to a witness who identified himself only as Adbullah.

Aswad, a political dissident, said dozens of people appeared to have been killed or wounded in clashes with security forces during those protests.

In Latakia, government blamed "armed gangs" who seized police weapons on the violence last week that led to the deaths there of 10 security force members and civilians and two gunmen, according to the Syrian state-run news agency, SANA. The agency reported that 200 people, most of them security forces, were wounded by the gangs.

"Certainly we deplore the violence in Syria," she said. "We call as we have on all of these governments during this period of the Arab awakening, as some have called it, to be responding to their people's needs, not to engage in violence, permit peaceful protests and begin a process of economic and political reform."