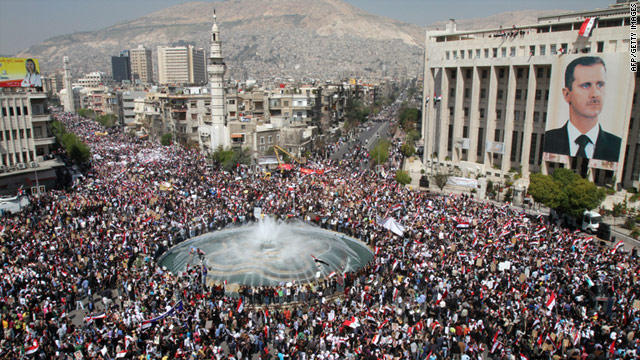 The two traveled to Syria on Thursday to cover the unrest in the country, according to Reuters. Television producer Ayat Basma and cameraman Ezzat Baltaji were last heard from on Saturday, when they sent a message to a colleague saying they were about to leave Syria for Lebanon, the news agency said.

Basma and Baltaji, both Lebanese nationals, were returned to their base in Lebanon on Monday, and said they were well, Reuters reported.

It was the first time in two days anyone with Reuters had spoken with the two journalists.

"We would like to thank everyone who helped us resolve the issue," the news agency reported after Basma and Baltaji were released.

A Syrian official said the journalists were detained and questioned because they did not have a permit to work in Syria and had filmed "in an area where filming is not permitted."

On Friday, Reuters said, Syrian authorities withdrew the accreditation from Reuters text correspondent Khaled Yacoub Oweis, saying his coverage of recent events in Syria was "unprofessional and false." The news agency said it stands by its coverage.

Several reporters have been detained, some briefly, in the midst of the unrest sweeping North Africa and the Middle East. Last week, four New York Times journalists were released by Libyan authorities after the Turkish government intervened on their behalf