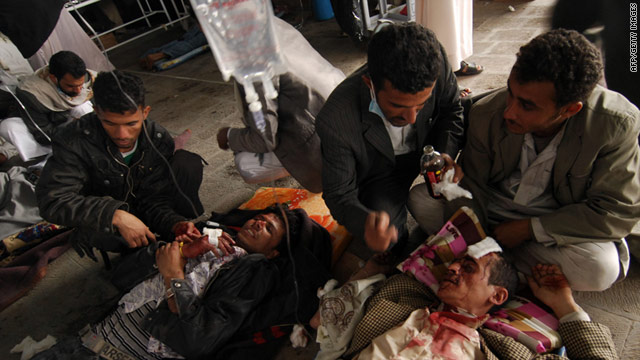 (CNN) -- Yemeni President Ali Abdullah Saleh dismissed his Cabinet on Sunday, according to Tareq Al-Shami, a spokesman for the country's ruling party, but has asked the officials to stay on until a new Cabinet is appointed.

The move followed what sources said were the weekend resignations of two top Yemeni officials to protest a government crackdown on protesters that left 52 people dead last week.

"The Embassy of the Republic of Yemen hereby would like to express its condolences and heartfelt sorrow for the loss of innocent lives," read a statement released Sunday by the Yemeni embassy in Washington, D.C. "The perpetrators of this heinous act will be prosecuted to the full extent of the law."

According to the statement, Yemen's chief prosecutor has launched an investigation into the shootings at Sanaa on Friday and is questioning 17 suspects accused of orchestrating the massacre.

News of Human Rights Minister Huda al-Bann's resignation came from an official in her office who is not authorized to speak to the media and asked not to be named.

A foreign ministry official told CNN about the resignation of Abdullah Al-Said, Yemen's ambassador to the United Nations. Al-Said was replaced by Abdullallah Yahya Alsalal, according to Yemen's embassy in the United States.

The resignations came amid new signs of cracks in support for Saleh.

Abulahoum "strongly" condemned Friday's violence, and in protest, has withdrawn a plan he proposed to mediate between the president and the opposition.

Members of Saleh's own tribe are also calling for him to step down, according to Yemeni ruling party officials who have asked not to be named as they are not authorized to speak to the media.

Tens of thousands of people protested Sunday outside Sanaa University in the capital, eyewitnesses said. CNN was not able to independently confirm the size of the protests.

Funerals were held Sunday for some of the people killed in attacks Friday, with bodies of the victims carried through the streets.

In addition to the fatalities, more than 100 people were hurt Friday in clashes between tens of thousands of anti-government protesters and security forces outside the university, medical officials on the scene said.

Saleh announced that a state of emergency had been declared, and he expressed his "deep regret" over the casualties.

Witnesses said the clashes began after government supporters and anti-government demonstrators threw rocks at each other. Security forces shot into the air and then into the crowd; they also fired tear gas to try to disperse the crowd, witnesses said.

Yemen has been wracked by weeks of unrest, with thousands protesting Saleh's government.