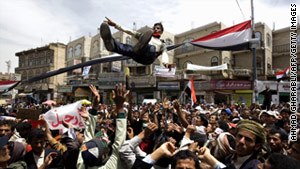 Yemen, like many other countries in the Mideast, has been wracked by weeks of unrest.
STORY HIGHLIGHTS

(CNN) -- Suspected al Qaeda operatives attacked soldiers at a security checkpoint in the eastern Yemeni province of Marib on Thursday, leaving three militants and three soldiers dead, according to the Interior Ministry.

Three other soldiers were wounded in the attack, believed to be coordinated by members of al Qaeda in the Arabian Peninsula, the ministry said.

Separately, security forces in southern Taiz province captured two militants, including Khalid Saeed Batarfi, a senior al Qaeda leader in Abyan province, according to a statement from the Yemeni Embassy in Washington. Batarfi oversees al Qaeda in the Arabian Peninsula's local media network and is responsible for conducting several terrorist attacks in Abyan and Hadramout, the statement said.

Meanwhile, Yemen has been wracked by weeks of unrest, with thousands protesting the government of President Ali Abdullah Saleh.

In addition, the country has struggled with a Shiite Muslim uprising, a U.S.-aided crackdown on al Qaeda operatives and a looming shortage of water.

High unemployment fuels much of the anger among a growing young population steeped in poverty. The protesters also cite government corruption and a lack of political freedom.

Saleh has promised not to run for president in the next round of elections.