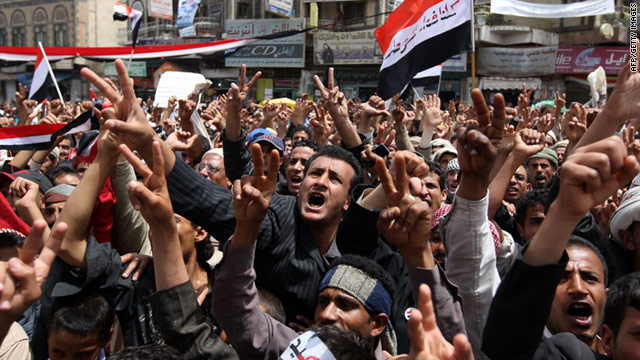 Police came to a house the four journalists shared in Sanaa, the Yemeni capital, and took them to an immigration office, where they were told they would be deported, according to two of the journalists, Oliver Holmes, a British freelancer, and Haley Sweetland Edwards, an American freelance journalist.

The other journalists ordered deported were Portia Walker, another British freelancer, and Joshua Maricich, an American writer and photographer, Holmes and Edwards said.

"On Monday morning, police came to the house. Some of them had guns," Edwards said. "They said, 'Get dressed quickly. We're going.'"

After several hours in a government immigration office, she said, the four were told without explanation that they would be deported.

The Yemeni government has not commented on the case.

Yemen has been wracked by weeks of unrest, with thousands protesting the government of President Ali Abdullah Saleh.

One of the deported journalists, Edwards, said the deportations worried her because relatively few Western reporters cover Yemen.

"We all did our best to incorporate the government perspective in our reporting whenever possible -- even going to pro-government and anti-government demonstrations," she said.

Holmes said he is sure the authorities deported them because of their reporting on recent anti-government protests.

"I've been in Yemen quite some time now," he said. "I've been threatened with deportation, but nothing like this has ever happened."

Human Rights Watch has accused Yemen's government of harassing, attacking, or allowing attacks on 31 journalists to stop them from reporting on the protests.

"Beating up journalists is a blatant attempt by the authorities to prevent the Yemeni people and the world from witnessing a critical moment in Yemen," said Sarah Leah Whitson, director of the group's Middle East and North Africa division.