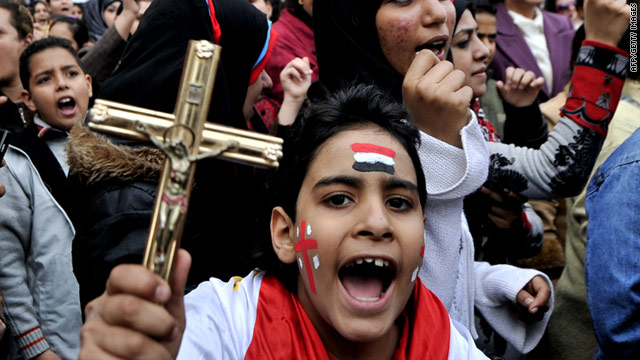 Cairo, Egypt (CNN) -- Egypt's military has started rebuilding a church burned down in an outbreak of unrest between Christian Copts and Muslims, a military official told CNN on Sunday.

The Shahedin Church in Helwan province south of Cairo, the capital, was burned earlier this month in what was believed to be a feud between a Muslim and Coptic family. Further clashes last Tuesday killed 13 Copts.

"The engineering department of the Egyptian Armed Forces has started to rebuild the church in Atfeeh today at the same exact location," Army spokesman Maj. Mohamed Askar said. "The Armed Forces will bear all expenses."

Meanwhile, thousands of Christians in Cairo have protested outside the offices of the Egyptian state broadcaster for nine consecutive days, demanding the rebuilding of the church and an end to what they call government persecution and discrimination.

The Egyptian military previously announced an investigation into the church burning and ensuing violence.

Tensions have increased this year between Egypt's Muslim majority and its Coptic minority.

A Coptic church in the town of Alexandria was bombed on New Year's Day, killing 23 people. The Palestinian Islamic Army, which has links to al Qaeda, claimed responsibility for what was the deadliest attack on Christians in Egypt in recent times.

Also in January, a man was sentenced for his part in an attack on another Coptic church a year ago, Egypt's state-run Al Ahram newspaper reported.

The religion split with other Christians in the fifth century over the definition of the divinity of Jesus Christ.