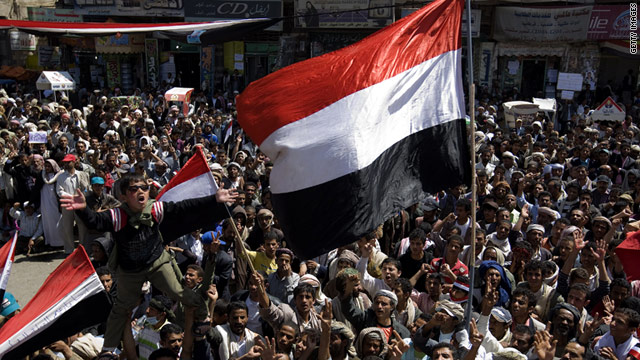 Sanaa, Yemen (CNN) -- Under pressure from ongoing protests against his government, Yemeni President Ali Abdullah Saleh pledged Thursday to bring a new constitution to a vote by the end of the year and transfer government power to an elected parliamentary system.

"We have communicated the demands of all the youth demonstrators to the government because they are the future, and the government will fulfill all their demands without strikes, clashes, or chaos," Saleh said in a nationally broadcast speech.

The president's plan also called for the creation of a unity government to review new election laws.

Saleh, who has refused to step down, has said he will not run again for the presidency in the next election. He has ruled Yemen for 32 years.

"It's like someone trying to score a goal from behind the net," he said. "Whatever he does is useless."

"Yemenis will not accept what the president said today," he said. "Too many protesters have died and the president is treating this and talking about all this like a storm that will pass.

The Yemeni Embassy in Washington issued a statement expressing the government's disappointment with the opposition's rejection of Saleh's "initiative aimed at political and national reconciliation."

Protests that erupted in Yemen early last month have left at least 30 people dead, according to Amnesty International. The human rights monitoring group urged Yemeni authorities to put an end to "deadly night raids and other attacks on protests."

Human Rights Watch, meanwhile, called on authorities to immediately investigate the apparent killing of two protesters by soldiers during a March 4 protest near the town of Harf Sufyan.

"We have credible allegations that thousands of peaceful protesters faced live fire by Yemen's military outside Harf Sufyan and that two unarmed civilians paid with their lives," said Joe Stork, the organization's deputy Middle East director.

A medical official said a Yemeni man injured in protests Tuesday at Sanaa University died of his wounds.

Yaser Al-Hasani, one of the demonstrators, said security forces cracked down after students defied their orders not to take food and blankets into the protest area outside the gates of the university. The supplies were intended for the thousands of anti-government demonstrators who have camped out calling for Saleh to step down.

Mohamed Ali Mutlak, 24, was among dozens of anti-government demonstrators wounded when security forces fired into the air and shot tear gas into a crowd of tens of thousands of protesters who had massed in front of Sanaa University, witnesses said.

Mohammed Abulahoum, a senior government official, condemned the force used by police and the military.

"There was no need for that force. This will only escalate the tension between both sides," he said Wednesday.

Yemen's anti-government demonstrations are unfolding in a nation wracked by a Shiite Muslim uprising, a U.S.-aided crackdown on al Qaeda operatives and a looming shortage of water.

Yemeni journalists covering their nation's unrest have voiced concern about threats and abuses against them, especially those who are working for foreign media outlets.

A police officer in Sanaa physically assaulted Al-Arabiya correspondent Jamal Noman as he covered a sanitation workers' strike in the capital on Monday, a local journalist told the Committee to Protect Journalists. The police officer also tried, but failed, to confiscate Noman's camera.

The next day, Al-Jazeera correspondent Ahmad al-Shalafi was threatened on the phone. One caller said his children would be kidnapped if he continued his critical reporting, the committee reported. The threat came after al-Shalafi's coverage of a prison protest.