From Rima Maktabi for CNN 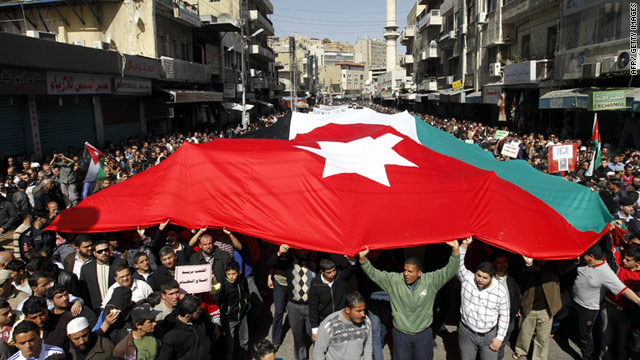 Amman, Jordan (CNN) -- Young Jordanians have been taking to the streets of their capital, inspired by revolutions they have witnessed in Egypt and Tunisia, and keen to make their own voices heard.

Large demonstrations in central Amman on February 25 and March 4 ended peacefully, after earlier protests had led to clashes between pro-government and anti-government rallies.

King Abdullah II has responded to some of the concerns by swearing in a new government with a mandate for political reform. The new government is headed by a former general, with opposition and media figures among its ranks.

Both Jordan's poor and better off have been united in their pursuit of change.

In a cafe in Amman, three young professionals talked about their frustrations with their country.

The youth are not rabble-rousing, spoilt or wanting government jobs spoon-fed to them.
--Rami Shtieh, financial advisor
RELATED TOPICS

Jafar Shami, a financial advisor, said: "The youth are not rabble-rousing, spoilt or wanting government jobs spoon-fed to them."

He added: "I believe the youth have no problem dealing with economic hardship, they accept that.

"What they don't accept is that they have to suffer economic hardship while at the same time there are some people who are enriching themselves through corrupt means.

"These two things together, I believe it's a lethal mix that the population will not accept."

Tala Al-Husry, a journalist and producer, said: "I would like Jordan to be more economically stable.

"I would like Jordan to make more use of its human capital. Some changes do need to happen in terms of the corruption and people's mentality towards jobs."

For Rami Shteih, an executive, the state plays too big a part in everyone's lives, leaving little room for private enterprise.

"We have an issue in Jordan which is reliance on the state and state employment, whether it's the army, police force or government," said Shami. "This is a mentality which needs to change.

"We need more technology, more business. People want to better themselves and do things for the community. You can't live off the state forever."

Deema Bibi, chief executive of Injaz, a non-profit organization that helps young Jordanians become productive members of society, agreed: "Most of our graduates for different reasons seek jobs in the public sector.

"If you go into any classroom at any given time and ask the students where they want to work when they graduate, most probably a male will tell you in the army, and a female student says she wants to be a teacher."

Injaz says it helps 100,000 young Jordanians a year through its programs, but many others have very little prospect of work.

Jordan is home to more than a million Palestinian refugees who live in camps, such as Bagaa on the outskirts of Amman.

Young boys in the camp have high hopes of being doctors, computer engineers or rebuilding their camp.

But young men find that in reality it's difficult to escape the unemployment and poverty of the camp.

Loay Khaled, a young Palestinian, said: "There are no job opportunities at all, especially for Palestinians."

Another, Ahmad Masaf, said: "My dream is like any other young refugee, just to get out of the camp and to work."