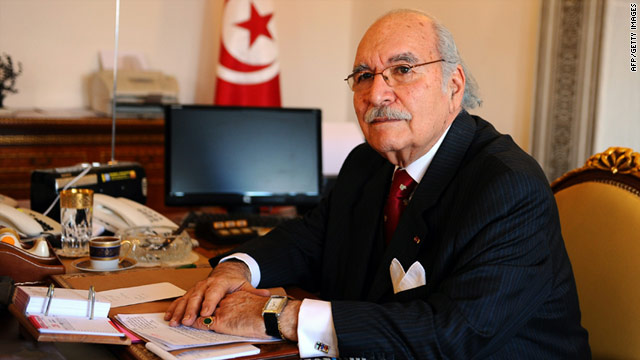 Fouad Mebazaa said he plans to continue serving in his interim role until the new parliament begins to work.
STORY HIGHLIGHTS
RELATED TOPICS

At least three Tunisian government officials resigned Monday and Tuesday, the country's official news agency reported, in the wake of the resignation of the prime minister on Sunday.

Popular protests in the north African nation led to the resignation of the long-time president in January, prompting a wave of unrest across the Arab world.

But the flight from Tunisia of President Zine El Abidine Ben Ali did not end the protests there, and Prime Minister Mohamed Ghannouchi quit on Sunday.

Ghannouchi told reporters Sunday that he was resigning "because I am not willing to be a person that takes decisions that could cause casualties." Three people were killed during protests in the capital, Tunis, on Saturday.

He also questioned "why a lot of people considered their main target to keep attacking the government, although a lot of its members agreed to join in this critical time."

In addition to the three killed, nine others were injured during the mayhem in Tunis, according to an Interior Ministry statement cited by Tunis Afrique Presse.

More than 100 people were arrested in the area around Habib Bourguiba Avenue, in the city's center, and accused of "acts of destruction and burning," the ministry said.

Protesters had gathered in the area to demand that the interim government step down and the parliament be disbanded.

Demonstrators were also asking for suspension of the constitution and election of an assembly that can write a new one, as well as organize the transition to democracy.

Protests in Tunisia erupted late last year. Fed up with corruption, unemployment and escalating prices of food, people began demonstrating after the self-immolation suicide of a fruit cart vendor in December.

By mid-January, Ben Ali -- who had ruled Tunisia since 1987 -- had turned executive power over to his prime minister and fled the country.

CNN's Tracy Doueiry and Jack Maddox contributed to this report.