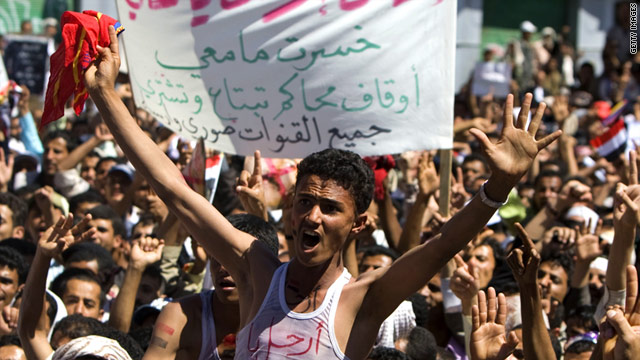 "The Yemeni people will not stay quiet on the blood that was spilled in Aden and we will avenge for them," said Hussein Ahmar, president of the Yemen Solidarity Council, on Saturday. "We call on all those loyal to Yemen to stand with the revolution until this regime falls."

The Yemen Solidarity Council is comprised largely of member of Saleh's own Hashid tribe. Members of the Baqil tribe will also join in protests, according to Ahmar.

But Saleh appeared to be standing firm, saying Saturday during a meeting with military leaders there was a plot against Yemeni unity, according to the official Saba news agency. The agency also said Saleh received pledges of support from sheikhs and local officials from Abyan Province during a meeting Saturday.

The international human rights group said that it has received reports that Yemeni security officials have prevented people from taking wounded people to the hospital.

"Events in Yemen are taking a serious turn for the worse and the Yemeni security forces are showing reckless disregard for human life," said Philip Luther, the group's deputy director for the Middle East and North Africa.

Witnesses said the victims of Friday's violence were anti-government demonstrators hit by gunfire when security forces shot into crowds of protesters in the city's Mualla district after 10 p.m. Friday. Yemeni government officials could not immediately be reached for comment.

On Friday, authorities insisted no one had been killed in clashes in another part of Aden, but witnesses said one protester died of gunshot wounds and 11 demonstrators were wounded.

The violence occurred after protesters gathered Friday across Yemen to demand Saleh's resignation.

Thousands of anti-government demonstrators -- mostly students -- lined the streets outside Sanaa University in the nation's capital. They were countered by a pro-government demonstration on Tahrir Square, where thousands waved flags and held up pictures of Saleh, who has ruled Yemen since 1978.

The country has been wracked by a Shiite Muslim uprising, a U.S.-aided crackdown on al Qaeda operatives and a looming shortage of water. High unemployment has fueled much of the anger among a growing young population steeped in poverty.

Demonstrators in recent anti-government protests have also cited government corruption and a lack of political freedom.

Baqil tribal leader Faisal Dhalee said Saleh is making a mistake in trying to hang on.

"If the ruling party had some wisdom left, than it would quickly leave power," he said.

Saleh he has refused to step aside immediately. On Monday, he compared the anti-government protests to an illness sweeping through the region.