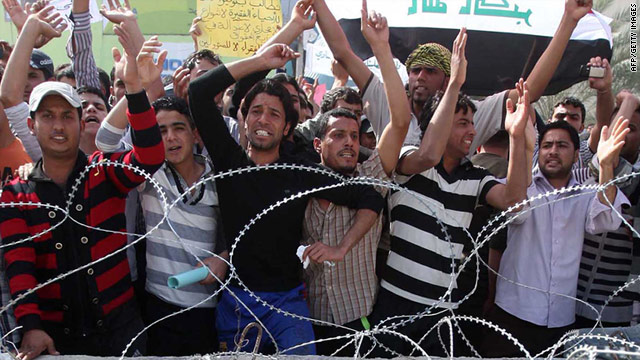 At least 10 people were killed, and dozens injured in a series of protests across Iraq on Friday.
STORY HIGHLIGHTS

Baghdad (CNN) -- At least eight people were wounded Saturday in the Iraqi city of Samarra during clashes between security forces and angry mourners accompanying the caskets of two people killed in protests the day before, according to local police.

With those deaths, the number of those reported killed in protests across the country rose to 13, according to official accounts.

In Saturday's incident in Samarra, protesters defied curfew to attend the funerals of two people killed during protests there, chanting "God is great" and "Down with the government."

Security forces battled some of the protesters and later opened fire to disperse the crowd, wounding at least eight, police said.

Two protesters critically injured during Friday protests in the Iraqi city of Tikrit died on Saturday, according to police there, bringing to four the number of people who died as the result of clashes with security forces.

In Basra, mourners also held a funeral procession Saturday for a protester killed the day before.

Ali Ghaim al-Maliki, the head of Basra's security council, told reporters Saturday that at least 71 people were wounded in Friday's clashes -- including 51 security forces and 20 anti-government protesters. Most of the injuries in the city, located about 550 kilometers (342 miles) south of Baghdad, occurred during fighting with stones and batons, he said.

Police said five other demonstrators were killed in the cities of Mosul and Hawijah. Unrest also flared in Baghdad, Falluja, Ramadi and in two towns in the province of Salaheddin.

In a statement released Friday, Human Rights Watch called on Iraqi authorities to investigate the deaths of demonstrators.

"The Iraqi authorities need to rein in their security forces and account for every single killing," said Tom Porteous, the organization's deputy program director. "The security forces need to use the maximum possible restraint in dealing with protesters."

The country's defense ministry has not issued a response to the reported deaths.

Iraqi Prime Minister Nuri al-Maliki had urged citizens not to participate in Friday's planned massive protests, claiming former members of Saddam Hussein's regime and terrorists were plotting to take advantage of the demonstrations to create chaos in the country.