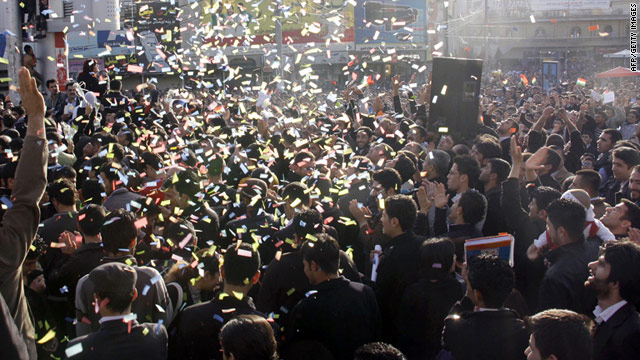 Kurdish protesters demonstrate against the government in the town of Sulaimaniyah in northern Iraq on February 23, 2011.
STORY HIGHLIGHTS
RELATED TOPICS

Baghdad (CNN) -- Demonstrators clashed with security forces around Iraq on Friday in confrontations that killed at least five people and wounded many others.

Protesters attacked and burned government offices in several cities. The clashes were particularly intense in Mosul and Hawijah, in northern Iraq.

In Mosul, two people were killed and 20 people were wounded Friday morning when Iraqi security forces opened fire on demonstrators who tried to force their way into a provincial council building in central Mosul, police said. Demonstrators destroyed equipment and burned furniture inside, police said.

In the town of Hawijah, west of Kirkuk, three protesters were killed and 12 others were wounded when Iraqi security forces opened fire on protesters after hundreds threw stones at police and troops, Iraqi Army Capt. Mohammed al-Angood said. Demonstrators later set fire to a building housing the city council's offices, police said.

Unrest also flared in Baghdad, Falluja, Ramadi and in two towns in the province of Salaheddin.

Helicopters hovered and security forces stepped up their presence in Baghdad as more than 2,000 demonstrators gathered in the city's Tahrir Square to protest corruption and poor government services.

In Basra, in southern Iraq, the governor submitted his resignation just a few hours after hundreds gathered outside his office demanding that he step down. In Falluja, west of the country's capital, hundreds demonstrated outside a city council building.

On Thursday, Iraqi Prime Minister Nuri al-Maliki urged citizens not to participate in Friday's planned massive protests, claiming former members of Saddam Hussein's regime and terrorists were plotting to take advantage of the demonstrations to create chaos in the country.

Authorities also announced a ban on all vehicle traffic -- except for Iraqi security forces vehicles -- in the cities of Baghdad, Mosul and Samarra and Tikrit, beginning at 12 a.m. Friday.

A police officer was killed and three others wounded when hundreds of demonstrators protested in the Iraqi town of Halabja over lack of basic services, corruption and unemployment, the town's mayor said Thursday.