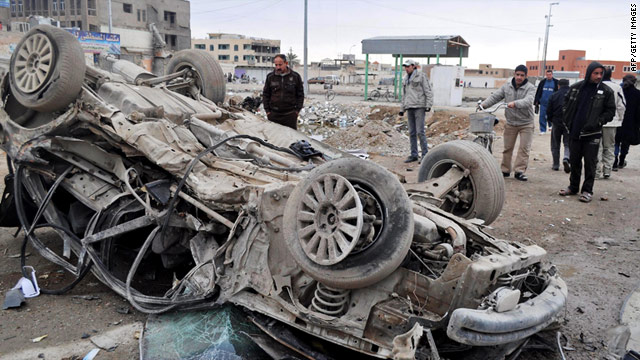 Iraqis inspect the site of a bombing that rocked the western city of Ramadi in this file photo from February 4, 2011.
STORY HIGHLIGHTS
RELATED TOPICS

Baghdad (CNN) -- At least 12 people were killed and 24 others wounded in a suicide bombing Thursday in the Iraqi city of Ramadi, police said.

The assailant, wearing a explosives-laden vest, blew himself up at a cultural center where people had gathered for a celebration of the Prophet Mohammed's birth, Ramadi police said.

Among the injured was Hakmat Zaydan, the deputy governor of heavily Sunni Anbar province.

Ramadi, the provincial capital about 100 kilometers (62 miles) west of Baghdad, was once a haven for al Qaeda in Iraq and witnessed some of the fiercest fighting in the Iraq war. Violence has dropped dramatically from a few years ago but attacks still occur.