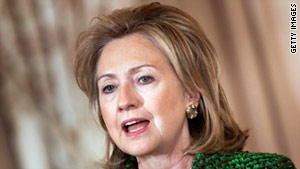 (CNN) -- A group calling itself the "Iran cyber army" claimed responsibility Tuesday for hacking into a number of Voice of America internet pages, according to reports from both Voice of America and Iran's semi-official Fars News Agency.

The group displayed a message on Voice of America's Farsi page, calling for an end to U.S. "interference" in the Muslim world.

"Ms. Clinton, do you want to hear the oppressed voices of nations from the heart of America?" the group asked. "The Muslim world does not believe in U.S. deceit. We tell you, stop intervening in Muslim countries."

The action was taken "in response to the propagation of lies and plots of anti-revolutionary sites," Fars reported, claiming that a total of 95 sites affiliated with Voice of America were hacked.

Fars said that Voice of America acts as "part of the United States' spying organizations."

Voice of America indicated that the cyber attack may have been launched in response to a recent ABC interview with Secretary of State Hillary Clinton. During the interview, Clinton referenced the State Department's opening of Twitter accounts in Arabic and Farsi, stating, "We want to be joining young people who, like young Americans, seek their right to express their views."

Voice of America noted that websites in other languages -- including Azeri, Dari, Pashtun, and Urdu -- were also targeted by the hackers.

The Iranian government is among a number of regimes in the broader Middle East and Muslim world targeted by protesters in recent weeks.

Thousands of security officers cracked down on landmark sites in Iran's capital and other major cities Sunday, striking at throngs of protesters with batons and rushing others on motorcycles, according to witnesses.