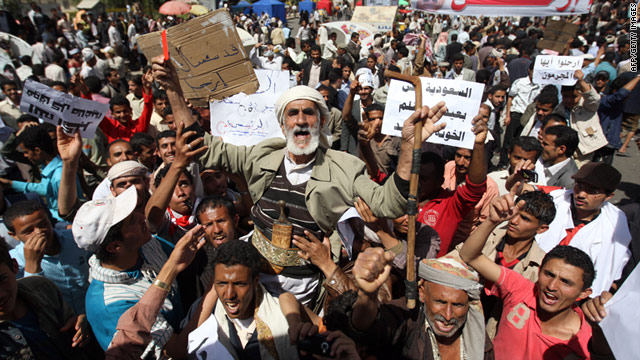 Protesters call for the ouster of Yemeni President Ali Abdullah Saleh during a demonstration in the capital Sanaa on Monday.
STORY HIGHLIGHTS

Sanaa, Yemen (CNN) -- Yemeni President Ali Abdullah Saleh rejected demands Monday that he step aside, comparing the anti-government protests in his country to a virus sweeping through the region.

Meanwhile, anti-government protests appeared to be gaining ground Monday with news that Houthi rebels, who have been battling the government for years, were staging protests and may come to Sanaa, the capital, to join Yemenis in demonstrations.

"The group of reforms was put forward in response to the request of the opposition," he said Monday. "But unfortunately, after we put this reform package on the table and received public support from most people in Yemen, the ceiling of their demands rose and their demands are unacceptable."

"For example," he added, "they are asking for the fall of the regime. Our people are replying to them in all of the governorates and telling them, 'Yes to political reforms, yes to legal reforms and constitutional reforms, but no to coups."

Thousands of Shiite Houthi rebels demonstrated Monday in northern Yemen, according to Hassan Zaid, general-secretary of the pro-Houthi Haq party. "These demonstrations will make the opposition stronger," he said.

He said the Houthis were in near-constant communication with the anti-government opposition. The opposition asked Houthi leader Abdul Malik Al-Houthi to hold the protests, and he obliged, Zaid said.

Members of the opposition dialogue committee are traveling to the northern Saada province from Sanaa to discuss bringing the Houthis to the capital to join protests, Zaid said.

Asked if this would end a cease-fire that has been in place between the Houthis and the government for months, barring some flare-ups, Zaid said, "The current government is too weak to announce a war at this time. And if the government tries to have a war right now, I can guarantee you the Houthis will be in Sanaa in two weeks."

Also Monday, between 3,000 to 3,500 anti-government protesters demonstrated peacefully in Sanaa for the 11th consecutive day. Security forces, stationed nearby to ensure peace, prevented about 50 pro-government supporters who tried to disrupt the rally outside Sanaa University, a witness said.

The area in front of the university is being called "Charge Square," according to Human Rights Watch.

"They attacked him, and they didn't allow us to help him," said Masood Abdul Bari. "We saw three get shot."

Other witnesses put the number of wounded at four.

Thousands also protested in the Taiz and Ibb provinces, according to eyewitnesses. Hundreds more demonstrated in Lahj and Thale provinces.

In addition to the most recent death, six people have been killed since Wednesday in anti-government demonstrations in Aden, hospital and government officials said.

A human rights organization in the country, HOOD, put the number of deaths as high as 12. Human Rights Watch also said 12 people had died, including Monday's death in Aden.

Also Monday, a prominent Yemeni cleric called for an end to arbitrary arrests and demanded those who carried out attacks and killings of protesters be prosecuted.

"The crimes of intentionally killing protesters will not be forgotten with the passing of time and those behind them must be brought to justice today or tomorrow," said Sheikh Abdul Majid al-Zindani on behalf of the Yemen's Scholars' Committee.

He also called on the government to stop the rise of commodity prices.

The United States considers al-Zindani a terrorist, accused in 2004 of supplying weapons to al Qaeda. But in Yemen, he wields considerable influence.

Saleh has blamed the unrest on foreign agendas and a plot against Yemen's stability, according to the state-run Saba news agency.

Yemen's situation is exacerbated by the U.S.-aided crackdown on al Qaeda, a Shiite uprising, a secessionist movement in its once-independent south and a looming shortage of water.