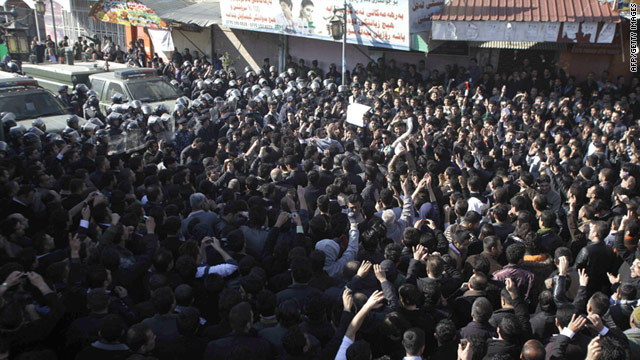 The attack occurred as hundreds of protesters demonstrated in central Sulaimaniya in northern Iraq, following clashes with security forces in previous days that left one person dead and more than 70 injured.

Most of the demonstrators opposed Massoud Barazani, Kurdistan regional president, and the ruling Kurdistan Democratic Party, and the protest occurred a few hundred meters from the KDP party office.

Police officials told CNN that Kurdish security forces were investigating the attack Sunday morning on NRT Kurdish television in Sulaimaniya. According to the officials, the pre-dawn attack destroyed equipments and furniture, and the station was set on fire.

Bahrooz Qashani, the governor of Sulaimaniya, condemned the attack on the broadcast station.

In a statement, NRT TV said 50 armed attackers stormed a gated community called "German Village" where the station is located.

The attackers fired weapons at broadcast equipment and burned the entire building, wounding one NRT guard, according to the statement.

A trail of blood spots from the station indicated one or more of the attackers was wounded, said the NRT statement.

NRT, the first independent television station in Northern Iraq, started broadcasting on February 17, and was the only station to air footage of shots fired at demonstrators on the first day of the protests, according to the statement.

"The destruction of the station comes at a time when all the other satellite channels cannot cover the events adequately," the statement said, adding that the broadcast company's owner had been threatened by local politicians on Saturday night. "Now, no other TV channels are left to independently cover events in Kurdistan."

Twana Osman, the general manager of NRT, said the regional government and ruling party "must be held responsible for this crime until the perpetrators are found and arrested," the statement said.

NRT is the first independent satellite channel funded by the private sector in northern Iraq, according to the statement.

In Nasiriya, more than 200 college students protested over lack of jobs and demanded that the local government find them employment. The protesters walked from Habobi Square in central Nasiriya to the Provincial Council's building. A committee representing the protesters then met with government officials.

Separately, in al-Batha, west of Nasiriya, hundreds of angry demonstrators rallied against corruption, lack of basic services and unemployment. Protesters also demanded the replacement of the city council, which they accuse of corruption.

On Saturday, clashes between police and protesters in Sulaimaniya injured 14 people, according to a regional health official.

Witnesses said police used water cannons and fired weapons over the heads of rock-throwing demonstrators who had taken to the streets to protest the violent response of security forces that killed one demonstrator and injured 57 who attacked the local offices of the Kurdistan Democratic Party.

Saturday's protesters shouted "Down, down with Massoud Barzani" in a demonstration that began at 11:30 a.m. and lasted several hours.

The clash with police happened when dozens of protesters attempted to attack the local KDP headquarters for a second time. Among the injured was a police officer.

Most of those hurt suffered minor injuries, according to Raytok Hama Salih, the head of the health department in Sulaimaniya province.

The violence followed another demonstration by hundreds of students at Sulaimaniya University seeking the release of people arrested in previous protests and the prosecution of a local party official they said ordered security forces to open fire.

On Thursday, Barzani issued a statement saying the protests were the work of a "very small group of people determined to undermine the stability of the region."

The regional government is organizing a meeting between government leaders and representatives of opposition groups scheduled for Monday, according to the statement.

The protests are the latest in a string of recent demonstrations across Iraq, apparently inspired by popular uprisings in Egypt and Tunisia and focusing on complaints of rampant unemployment and poor government services.