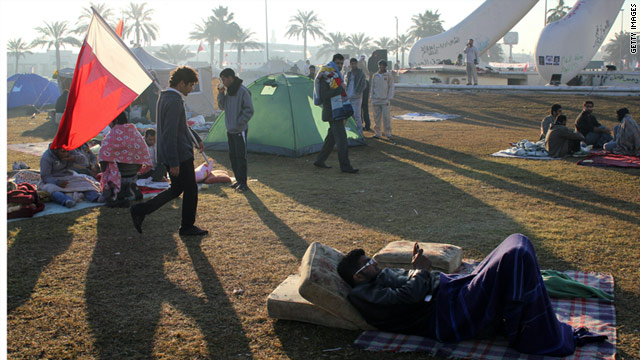 Manama, Bahrain (CNN) -- A day after thousands of joyous Bahrainis retook a major square in the heart of the island nation's capital, seven opposition groups met in Bahrain to consider their next steps after an appeal from Crown Prince Salman bin Hamad al Khalifa for a national dialogue.

As the parties tried to coordinate a common position and dusk fell Sunday, thousands of people continued to camp out at the Pearl Roundabout -- many vowing to continue their sit-in until political reforms and other concessions are promised.

The number of people increased in the late afternoon, but the atmosphere remained relaxed. The security forces had left the area Saturday on the instructions of the crown prince.

Groups of lawyers and teachers gathered to add their voice to the demand for political change and constitutional reform.

Talking with Crown Prince of Bahrain

Opposition parties met Sunday to coordinate a common position. They are demanding an independent investigation into the deaths of protesters earlier in the week.

The crown prince in a Saturday interview with CNN's Nic Robertson said he was deeply sorry for the deaths of protesters. An investigation will be launched and those responsible will be held accountable, he said.

The sudden ferment in the kingdom, a tiny but strategically critical country that's a key U.S. ally and home to the U.S. Navy's Fifth Fleet, has caused jitters among other Gulf states.

About 10 protesters are thought to have died in five days of protests, but opposition activists say dozens more are unaccounted for.

The opposition also wants answers about people unaccounted for since the security forces moved in to clear the Pearl Roundabout in the early hours of Thursday morning, using tear gas, pellet guns and clubs.

Parliament member Jamil Kathem from Al Wefaq opposition party told CNN Sunday morning, "We are not obstructing dialogue but we need solid grounds to start talks with the ruling regime."

Although the opposition's demand that the armed forces withdraw from the streets has been met, it is "not enough," Kathem said.

Al Wafaq party represents many of the majority Shiite community and has 18 seats in parliament.

The opposition also includes secular Sunni groups like the National Democratic Action Party. It is also demanding that state media stop what it calls its "aggressive and escalating" campaign against the opposition, and an end to censorship of social media. They want the government to compensate the injured and help them with their medical treatment.

The leader of the National Democratic Action Party, Ibrahim Sharif, told CNN that the opposition would discuss further steps while the sit-in continues at the Pearl Roundabout. "There are positive steps taken by the government; however there are many pending issues before we start the dialogue," Sharif said.

On Saturday, the crown prince told CNN that all political parties in Bahrain would have a seat at the table.

"What we must do is extend our hand to all of those who would like to reach out across the aisle, from all sects, from all political ideologies and say enough," he said.

The governor of the Central Bank of Bahrain, Rasheed Al Maraj, said banking operations in the kingdom were functioning normally, and the currency remained stable.

Responding to the warning by one credit agency that it may review the rating of Bahrain's sovereign debt, Al Maraj said: "We believe that the economic fundamentals of the kingdom of Bahrain remain strong and that the short-term economic and political developments should not entirely reflect on the review."

The cost of insuring Bahrain's debt has risen to its highest since 2009.

The sight of throngs of protesters celebrating in the Pearl Roundabout late Saturday was a dramatic turn of events two days after security forces ousted demonstrators from the spot in a deadly attack.

Salman ordered the removal of the military from the area, a top demand by opposition forces, and told CNN's Nic Robertson that citizens would be permitted to stay in the spot without fear.

Thousands of people streamed into the roundabout Saturday, the focal point of protests in central Manama, waving flags, praying, dancing and honking horns.