Report: Family of Iranian opposition leader worried for his well-being 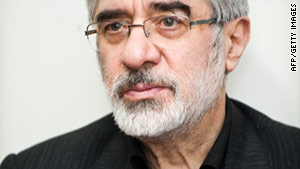 Opposition websites report Mir Hossein Moussavi and his wife continue to be under a house arrest that started Monday.
STORY HIGHLIGHTS
RELATED TOPICS

(CNN) -- The daughters of Iranian opposition leader Mir Hossein Moussavi and his wife, Zahra Rahnavard, say they haven't been able to see or contact their parents for days and they're concerned about their well-being, opposition websites Jaras and Kaleme reported.

Both websites report Moussavi and his wife continue to be under a house arrest that started on Monday -- the day he and fellow opposition leader Mehdi Karrubi called for an anti-government rally.

Thousands of government opponents marched in Tehran on Monday. And Wednesday, thousands more took to the streets for the funeral of a man killed in Monday's demonstration.

Security forces have surrounded Moussavi's Tehran home, blocked anyone from coming or going, and cut off all phone lines, the websites reported.

A van with tinted windows has blocked the narrow alley that leads to Moussavi's home and security forces are questioning and turning away anyone who tries to enter.

Moussavi's daughters haven't been able to visit or contact their parents since Wednesday and have no information about their condition, according to Kaleme.

Moussavi's family members say the security forces have told them they're from the prosecutor's office, but have not provided any identification or court order for the heightened restrictions, Kaleme reported.

CNN could not independently verify the reports. Reporting from Iran has been difficult this week -- foreign journalists were denied visas, accredited journalists living in the country were restricted from covering the demonstrations and internet speeds slowed to a crawl in an apparent attempt to both limit protest organizing and restrict information from being transmitted out of the country.

Moussavi's hotly disputed electoral defeat to President Mahmoud Ahmadinejad in June 2009 was the starting point of bloody protests in Tehran that summer.