In Jordan, some injured in scuffles 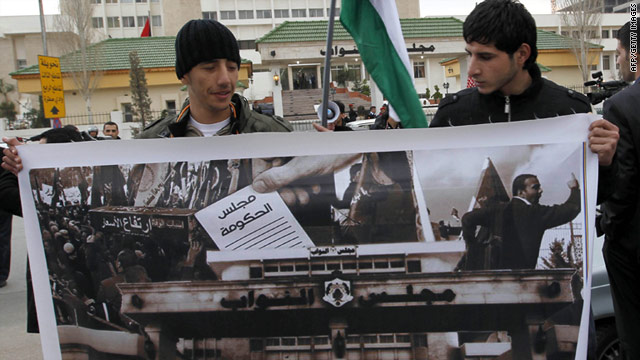 The anti-government protesters, rallying in Amman, were calling for reforms and for abolishing the peace treaty between Jordan and Israel.

At one point, pro-government "thugs," some witnesses said, went after anti-government demonstrators with sticks and stones, but it's unclear who started the fighting.

Police swiftly intervened and put the situation under control.

Anti-government demonstrators said five injured people went to a private hospital for treatment. One of the five had a broken arm, they said.

Police said four people were treated for injuries, and one remains in the hospital. It was unclear whether the four were among the five reported injured by the demonstrators.

Estimates of those on the street ranged from 200 to around 600. It was unclear how many were from which political camp.

"We are here just saying we need to change the constitution, we need election (elected) government, we need to stop the parliament, and we don't need the policemen to follow us everywhere, in our home, in universities, in the streets," he said.

Meanwhile government supporters chanted, "With our souls, with our blood, we'll die for you, father of Hussein" in reference to King Abdullah II.

Jordan's King Abdullah II earlier this month swore in a new government with a mandate for political reform amid a wave of protests.

The country's economy has been hit hard by the global economic downturn and fast-rising commodity prices.