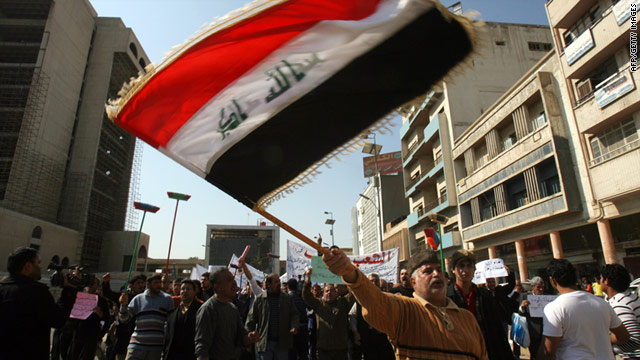 (CNN) -- Roughly 200 Iraqi protesters hit the streets Friday in central Baghdad, the latest in a string of Middle East cities to be affected by the wave of unrest sweeping the region.

Protesters are also trying to organize a larger demonstration -- part of what they are now calling the "Iraqi revolution" -- for next Friday. Prime Minister Nuri al-Maliki told reporters "there should be no problem" issuing official permission for a larger protest if a formal request is made.

The prime minister expressed concern, however, that protesters could be "infiltrated by saboteurs either from those who lost in (Iraq's recent) elections or by the remains of the Baathists or al-Qaeda terrorists."

One person was killed and 57 were injured Thursday when hundreds of protesters clashed with security forces in Sulaimaniya, a city in the Kurdish region of northern Iraq, according to Dr. Raykot Hamed Salih, a health official there.

Meanwhile, at least one person was shot dead and 55 others -- including four police -- were wounded Wednesday when private security guards and Iraqi security forces fired on hundreds of demonstrators outside the governor's office in the eastern city of Kut, health officials said.