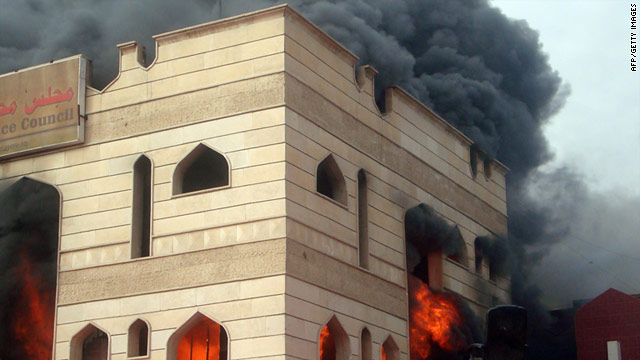 Baghdad, Iraq (CNN) -- A least one person was shot dead and 55 others -- including four police -- were wounded Wednesday when private security guards and Iraqi security forces opened fire on hundreds of demonstrators outside the governor's office in the eastern city of Kut, health officials said.

Police officials in Kut, about 63 miles (110 kilometers) south of Baghdad, tell CNN that nearly 2,000 demonstrators demanded the resignation of Wasit's provincial governor, Latif Hamed, accusing him of corruption. Some of the protesters tried to force their way inside the governor's office, prompting private security guards to shoot at them, police said.

After the shooting, the situation escalated rapidly and the protesters became angrier, Kut police said.

Dozens of protesters stormed the governor's office again and destroyed furniture inside, then set the building on fire. Another group of demonstrators went to the governor's house and set it on fire.

Kut police tell CNN that Hamed was not in the city when protesters attacked his office and his house.

Another group of protesters stormed the provincial council building and set it on fire, forcing some council members to flee the building from a rear gate, police said.

The demonstration was to warn the government and lawmakers to conduct reforms and end the corruption "that destroyed this country," said one protester, an older man.

"Look at our city," another protester said. "It is a ruined city. The government has not done anything to improve the services here or find jobs for our sons."

"This government is only looking (out) for its interests and not the interests of Iraqi people," another said.

The protesters were heard shouting, "Down with (Prime Minister Nuri) al-Maliki, down with the corruption, down with thieves." Others were carrying a banner that said, "Eight years of suffering, where are your promises?" referring to the Iraqi government that took power after Saddam Hussein's regime in 2003.

On February 3, another rally was held in Kut as citizens protested against the lack of basic services, unemployment and corruption and called for improvement of food rations in Wasit province, a predominantly Shiite province about 68 miles (110 kilometers) south of Baghdad.

The demonstrations are the latest in a series across Iraq, as protesters are inspired by uprisings in the Middle East.

In Falluja, hundreds of protesters walked toward the city council building and the mayor's office on Tuesday, demanding the resignation of the mayor and the head of the city council because of corruption and their inability to provide basic services to the people.

Iraqiya state TV, for the first time since the demonstrations started across the country more than two weeks ago, broadcast video footage of the Kut demonstration and urged people to protest peacefully and not to turn to violence.