Bahrain, from pearls to protests 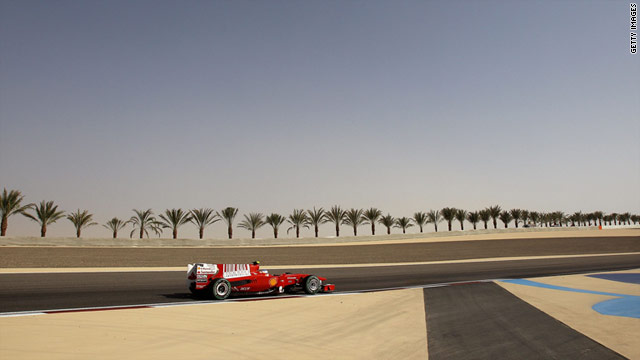 Bahrain was the first Middle Eastern country to land a Formula One Grand Prix race, in 2004.
STORY HIGHLIGHTS

(CNN) -- Key facts about Bahrain, the Persian Gulf island state now facing protests similar to those that have wracked other Middle Eastern countries, as compiled by the CNN Wire:

-- Bahrain is a chain of small islands off the eastern shore of the Arabian Peninsula, nestled between Saudi Arabia and Qatar. The kingdom takes its name from the largest island, where the capital, Manama, is located.

-- Bahrain's 2010 census found a population of 1.2 million, but Bahrainis are a minority in their own country. About 54 percent of its population are expatriates, the census found.

Injured taken to hospital in Bahrain

-- Though its ruling family is Sunni, Shiite Muslims make up about two-thirds of Bahrain's population.

-- A 2006 study by the International Confederation of Free Trade Unions reported that guest workers make up 60 percent of the country's labor force.

-- Bahrainis have had universal suffrage since 2002. The lower house of its parliament is elected, while the upper house is appointed by the king.

-- Bahrain's current monarch, King Hamad bin Isa Al Khalifa, is the latest ruler in an Arab dynasty that wrested control of the archipelago from Persia in the 1780s.

-- Bahrain was a British protectorate from 1861 to 1971, when it became fully independent.

-- Before the discovery of oil in 1932, pearls were the backbone of Bahrain's economy. That history is reflected in the monumental sculpture that sits in Manama's Pearl Roundabout, the scene of some of the recent demonstrations.

-- Pop star Michael Jackson moved to the island kingdom with his family after his 2005 acquittal on child molestation charges in the United States and spent almost a year as a personal guest of a Bahraini prince. The prince later sued Jackson, claiming he had paid all of Jackson's living expenses and advanced funds on a music contract on which the singer reneged. The case was settled in 2008, less than a year before Jackson's death.

-- Bahrain has been the headquarters of the U.S. Fifth Fleet, the naval arm of American forces in the Middle East, since 1995. The U.S. Navy has maintained a presence there since 1949.

-- Bahrain has contributed a contingent of police to help provide security for the U.S.-led coalition fighting in Afghanistan.

-- The monarchy views Iran, its neighbor across the Persian Gulf and onetime ruler, with "deep suspicion" and suspects it of supporting Shiite opposition movements, according to a U.S. diplomatic cable disclosed by the WikiLeaks website.

-- Iran has asserted territorial claims over Bahrain both before and after the 1979 revolution that deposed Shah Mohammed Reza Pahlavi and brought the current Islamic republic to power.

Petroleum makes up about 30 percent of the country's economy. But at an estimated 125 million barrels, Bahrain's oil reserves are a tiny fraction of those held by most of their neighbors.

Since the 1960s, the monarchy has worked to diversify its economy, turning the country into a banking, shipping and refining center.

Bahrain was the first Middle Eastern country to land a Formula One Grand Prix race, in 2004. With its racing season set to begin in March, Shaikh Salman bin Isa Al Khalifa said Tuesday that race authorities are keeping a close eye on the protests "and will respond appropriately to any further developments."