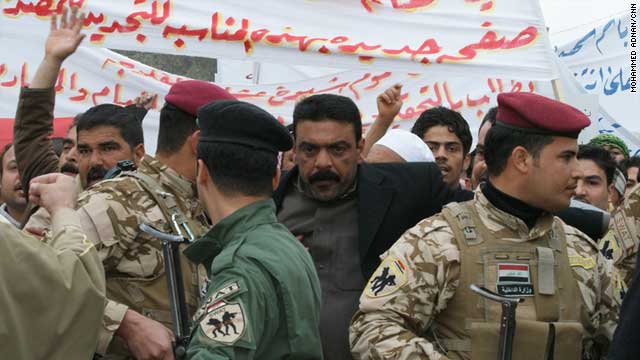 Protestors took to the streets of Falluja on February 15 rallying against corruption and demanding better basic services.
STORY HIGHLIGHTS

Baghdad (CNN) -- Hundreds of Iraqi demonstrators took to the streets Tuesday in at least two areas, protesting against corruption, the government's inability to provide basic services and shortages of food, water and power.

The protests were taking place in the Sunni town of Falluja, about 35 miles wast of Baghdad, and the Shiite district of Sadr City in eastern Baghdad. Police also reported smaller protests elsewhere in Baghdad and in several provinces.

The demonstrations are the latest in a series across Iraq, as protesters are inspired by uprisings in the Middle East. On Sunday, hundreds demonstrated in Ramadi, about 100 kilometers (62 miles) west of Baghdad.

In Falluja, hundreds of protesters walked toward the city council building and the mayor's office, demanding the resignation of the mayor and the head of the city council because of corruption and their inability to provide basic services to the people.

Some demonstrators shouted, "Down with al-Maliki," referring to Prime Minister Nuri al-Maliki. Others carried banners saying, "No for dividing Iraq, yes for its unity" and "No for sectarianism, yes for unity, down with al-Maliki's government." Still others said, "No restriction on freedom of expression, no for random detentions and raids, no for corrupted (politicians) and thieves," and "We demand better basic services -- electricity, oil and improving the food rations."

Iraqi security forces from the police and army carried machine guns as they surrounded the demonstrators.

In Sadr City, protesters were heard shouting "No for corrupted government" and others yelled, "We voted for you, where are your promises?"

Iraqi politicians, meanwhile, took advantage of a birthday ceremony for the Muslim Prophet Mohammed, founder of Islam, that was broadcast live on Sunni and Shiite local television to deliver a message to the people. Al-Maliki, a Shiite; the Sunni acting vice president, Tariq al-Hashimi; and Osama al-Nujafi, the Sunni speaker of parliament, all spoke during the ceremony.

"Our crisis cannot be solved easily. However, after we have established a solid ground, we will need time to be able to achieve all the services that our people need," al-Maliki said. He also referred to sectarian violence that previously took place in Iraq, calling it "the dirtiest war, in which Sunni killed Shiite and Shiite killed Sunni."

Studies and statistics show that it can take at least 20 years to establish safety and security following a war, the prime minister said.

Al-Hashimi, meanwhile, praised the uprisings in Tunisia and Egypt and urged politicians to listen to the demands of their people.

"Our people have waited a long time for some political reforms and they are right," he said. "Let's work hard to achieve it... We have a limited opportunity to achieve it and we should not waste it this time."

In a news conference held Tuesday at his office in Baghdad, former Prime Minister Ayad Allawi criticized the government's performance.

"Iraqi politicians should respect the peaceful protests" according to Iraq's constitution, Allawi said.

"There are oppressions in Iraq, problems with basic services, financial problems, security problems," he said.