Police and protesters clash in Bahrain 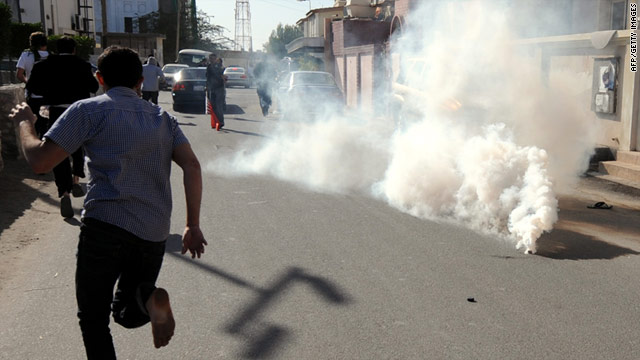 Protesters run for cover after police fired tear gas canisters to disperse them in the village of Diraz in northwest Bahrain.
STORY HIGHLIGHTS
RELATED TOPICS

(CNN) -- The unrest spreading through North Africa and the Middle East has reached the Persian Gulf nation of Bahrain, according to reports from the state news agency.

At least three police officers and one demonstrator have been injured in clashes, the news agency reported. The injuries occurred during an attack on a police station during protests Sunday evening, the news agency said.

After three officers were injured, police fired on protesters with rubber bullets, causing one injury, the news agency said.

Further protests were scheduled to take place in Bahrain on Monday, making the country the latest in a string of nations to experience popular protests that began in Tunisia.

Protesters who have organized on Facebook, Twitter and with e-mails want political reforms, including a constitutional monarchy.

Bahrain hosts the headquarters of the U.S. Navy's Fifth Fleet.