Ship believed captured by pirates off coast of Oman 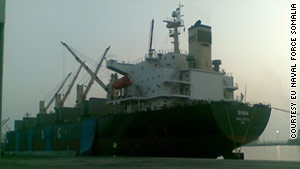 The Maltese-flagged MV Sinin likely became the second ship in a week to be hijacked in the northern Arabian Sea.
STORY HIGHLIGHTS

(CNN) -- In likely the third hijacking in a week, a ship is believed to have been captured by pirates off the coast of Oman, the European Union Naval force said Sunday.

The MV Sinin was believed to have been captured on Saturday, about 350 nautical miles east of Oman in the northern Arabian Sea, the force said in a statement.

The vessel has a crew of 23 people -- 13 Iranian and 10 Indian nationals. The crew sent out a distress signal on Saturday, saying the ship was under attack. An aircraft from the Combined Maritime Forces responded, and photographed two suspected pirate skiffs on board the vessel, the naval force said.

"There has been no communication with the ship since the distress signal was sent, and the MV Sinin has now changed course toward the Somali coast," EUNAVFOR said. "There is no information on the condition of the crew."

The Maltese-flagged and owned MV Sinin was en route to Singapore from Fujairah, United Arab Emirates, when attacked, authorities said.The statement from the naval force did not indicate what cargo the Sinin was carrying.

On Wednesday, the MV Irene SL, a Greek-flagged and Panamanian-owned tanker, was headed from Fujairah to the Egyptian port of Suez when it was attacked in about the same place in the north Arabian Sea, EUNAVFOR said. The ship was carrying 266,000 tons of crude oil. There had been no communication with the ship, Greek and EUNAVFOR officials said.

On Tuesday, pirates in the Indian Ocean attacked and boarded an Italian-flagged and owned oil tanker about 670 nautical miles east of Yemen's Socotra Island. The MV Savina Caylyn was headed from Sudan to Malaysia when it was attacked by five people on a skiff using small arms and rocket propelled grenades.