Fresh clashes in Yemen over support for government 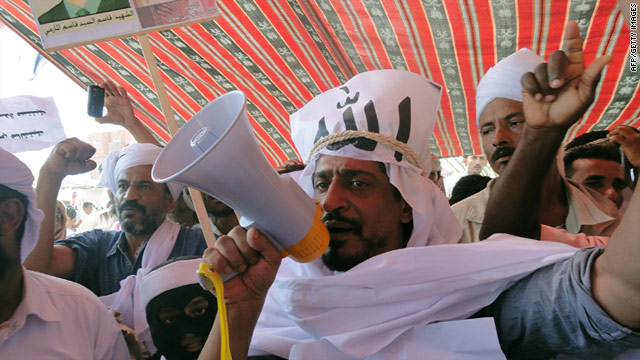 Tareq Fadhli, a former jihadist leader, shouts slogans during a protest in the southern Yemeni city of Abyan on February 11.
STORY HIGHLIGHTS

Sanaa, Yemen (CNN) -- Brief clashes erupted Saturday in Yemen between hundreds of pro- and anti-government demonstrators who staged rival rallies in the capital.

The clashes, which left a small number of people injured, followed an anti-government protest Friday night in which men armed with knives attacked more than a thousand demonstrators, according to human rights groups.

A group of around 700 people turned out Saturday morning at the gates of Sanaa University to give their support to the Egyptian people following the ouster of Egyptian President Hosni Mubarak, said Fuad Dahaba, a member of parliament for the opposition Islah party.

The protesters also demanded change in Yemen and called for the fall of President Ali Abdullah Saleh's regime.

What's next for Egypt?

"Yes to the revolution, no to oppression," they chanted, alongside cries of "The people are the power" and "Saleh, leave -- leave while you can."

Thousands of other anti-government demonstrators began marching through Sanaa's streets to join the protest at the university.

At the same time, about 400 pro-government demonstrators had been gathering at Sanaa's Tahrir Square in a festival atmosphere, chanting "No to chaos, yes to peace."

Al-Namsha said he was attacked by the government supporters, who began hitting with sticks and fists when the clashes began. Anti-government protesters, some of whom were also carrying sticks, fought back, Al-Namsha said.

At least six anti-government demonstrators were hurt, he added.

Security forces then stepped in and the demonstrations ended.

Anti-government protests have recently spread across Yemen, inspired by the revolts that ousted the Tunisian and Egyptian presidents.

The protesters Friday had initially taken to the streets of Sanaa to support Mubarak's ouster but later changed their focus to Yemen.

"We did not call for any protests and those out today from both sides were expressing their opinion," he said Saturday.

Al-Anesi said at least 17 people were arrested, most of them rights activists.

A day after the clashes, Yemen said it is confident the military council that took over Egypt will steer the nation through the political crisis, the Yemeni official news agency reported Saturday.

Yemen "expresses its respect for the choice and the will of the Egyptian people," a government official said, according to Saba news agency.

Saleh has said he will not seek another term and would postpone parliamentary elections scheduled for April to allow more time for reform talks with the opposition.