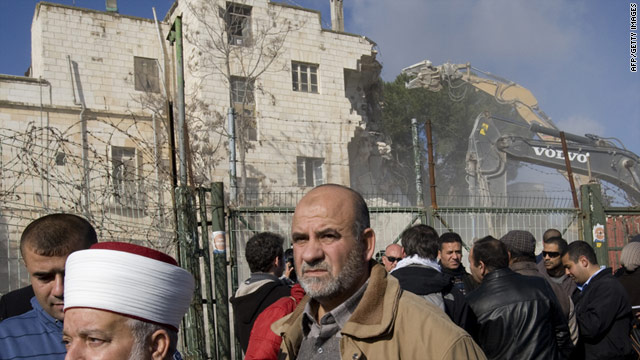 Meir Margalit, councilman for the left-wing party Meretz, said the municipality planning committee approved the construction of two buildings that would house 13 apartments for Jews.

On one of the building sites is an empty building that was sold to the developers by its Palestinian owner, Margalit said. The second building is to be built on land that the developers acquired from the Israeli government, which had held the property under a law that recognizes that it was owned by Jews before Israel's war of independence in 1948.

The plans submitted for approval are being developed by Chaim Silverstein, a well-known right-wing entrepreneur. Silverstein is associated with extremist settler groups that are dedicated to acquiring properties in East Jerusalem, evicting Palestinians and inhabiting them with Jewish settlers.

After committee approval, the plans go up for any objections for 60 days before the next stage of approval.

The Sheikh Jarrah neighborhood in East Jerusalem has become an area highly coveted by Jewish nationalists wishing to cement Jewish claims on the land. It also is a fault line in the public debate about Israeli building in Arab areas of East Jerusalem. Every week, hundreds of Palestinians, Israelis and international activists stage protests in the neighborhood to protest the Israeli government's building policies.

Attorney Mohamad Dahleh, who represents one of the families that would be evicted under the new construction plan, said the family is already fighting off a lawsuit from a group of settlers wanting to evict them. He told CNN he is surprised that construction companies would pursue this project while the family's case remains in the court system.

The Israel Land Fund says it "strives to ensure that Jewish land is once again reclaimed and in Jewish hands."

Elie Isaacson, a spokesman for the Jerusalem municipality, said, "The building projects in question are private and not municipal ones. The municipal local planning and construction committee is only authorized to review them from an urban planning perspective. Discriminating against those who issue zoning requests on the basis of their religion, color or creed would be both illegal and completely immoral."

Mohamad Shtayeh, a senior Palestinian negotiator, said, "There is no difference for us whether the colonization of Jerusalem is done through private companies or by the municipality or by the government. At the end of the day, Israel is creating new realities on the ground. All of it leads to the Judaization of the city and a total erosion of a two-state solution."

Dimitri Diliani, a spokesman for the Palestinian faction Fatah, said "two American-registered companies" are behind the construction project in "defiance not only of international law but also U.S. laws that prohibit American companies from violating international law."